Why motorbikes are better than cars

Bikes vs Cars4
Some car drivers love their car. I’ve had a few cars in my time though and haven’t really loved any of them. And I...

Some car drivers love their car. I’ve had a few cars in my time though and haven’t really loved any of them. And I know that plenty of other folk out there could say exactly the same. For a lot of us, a car is just a tool, good for getting you from A to B. A bike, on the other hand, is more of a toy. Sure, some use their bike to get from A to B, but plenty of us only ride our bikes for the sheer thrill of it. And for the love of our bikes. That’s because motorbikes are better than cars.

They say beauty is in the eye of the beholder, don’t they, and it most certainly is. But if you were to ask any beholder from here to Timbuktu what the most beautiful road vehicle is, he would probably say something like Ducati’s new Panigale V4 SP, or MV’s Brutale 1000 RR. He would, by no means, say the Nissan Qashquai, or the Kia Sedona; it just wouldn’t happen. Every car on the street these days looks virtually the same. They’re just a box made from metal and glass with a wheel at each corner. They have looked the same for years and I, for one, am sick of the sight of them.

It’s a whole different kettle of fish in the motorbike world, though. Yes, they’re just and engine and a frame with a wheel at either end, but every one is different. Like a priceless artwork, one fleeting glance at any motorcycle can evoke emotions that you never new existed. Feelings you’ve never felt. Can a car do that? Can it fuck. Can you even remember what the last car you saw was? I can’t. I can’t even remember what colour it was, that’s how memorable an experience it was. Automotive designers are going to have to do a whole lot better if the fruits of their labour are ever going to grab me by the proverbial balls.

I know that some would say that over the years (particularly recent years), the cost of certain bikes has started to get a bit silly. It’s true that they aren’t as cheap as they once were, but fuck me, what is? But when you compare the price of bikes to that of cars… Yikes! That’s when you realise we aren’t doing two bad, over here in Motorcycle City. Ok, I’ll admit that some cars are in the same ball-park, price-wise, as bikes. You could buy a Dacia Sandero for £7,995. But let’s face it, why the fuck would you want to? Have you seen the state of the bastard things? That sort of money in the motorcycle market would get you a KTM 790 Duke (£7,499) or a Yamaha MT-09 (£8,750), two proper fun, proper engaging little bikes. And that’s just a few I’ve plucked out of thin air.

On the other end of the motorcycle price spectrum, at the £20k mark, you can pick up all the bike you’ll ever need. Whether it’s a BMW S 1000 RR M Sport, the bike that blitzed the opposition on both the road and track elements of our 2020 Mega Test, or a cruiser, roadster or adventure bike from just about any of the major manufacturers. According to whatcar.com, the best car for less than £20k is a Škoda… I mean, come on. If you want to match the performance of £20k superbike (like the aforementioned BMW S 1000 RR M Sport), in a car, you’d need to spend ten times the amount on something really special. I think we can all agree that compared to bikes, cars are a right old rip-off.

Yes I know you can’t carry your golf clubs round on the back of your bike (well not easily anyway). But I still maintain that bikes are a lot more versatile than cars. They really are the machine that lets you go anywhere, from tarmac to dirt and everything in between. In fact, Robbie Maddison also proved that you can, with only the most minor alterations, ride on water too. Stick that in your pipe and smoke it, Jesus.

Anything really does go, for us motorcyclists, as I’m sure anyone who has given it a go will vouch for. Whether it’s getting down and dirty on the MX track, or packing you rucksack and roll bag full of pants, socks and packets of three before heading for the hills, there’s always a bike for the job. In fact there are some bikes capable of doing it all. Take KTM’s 1290 Adventure for instance, which is just as happy drifting around on a dirt track, as it is plodding along on the open road. Alright, I know that you could probably take your Chelsea chariot across the village green without getting it stuck (if you can remember how to turn 4wd on), but let’s face it, you’re not going to, are you?

For some, this this alone means motorbikes are better than cars. As previously touched upon, yes, you can try and match the performance of a superbike. But you’d have to spend hundreds of thousands, sometimes millions of pounds, to achieve it. Most of us will never be able to afford that. Some of us will never be able to afford a £20k superbike, either, because that’s still a proper fat wad. But many of us, at some stage in our lives might just be able to afford a second hand superbike. These days it’s certainly possible to pick up a 200bhp, 200mph bike for less than £10,000.

But it’s not just the superbikes that are fast. Take your average roadster, or cruiser; you’re still talking 150mph. I know that is doable in a car, yes, but not the kind of cars most of us drive. And even kids’ bikes are fast. When I turned 17 and was allowed to ride a bike on the road, the Aprilia RS 125 that I opted for would eat all my mates cars alive on the Friday lunchtime race to McDonalds; the Vauxhall Novas and the Ford Fiestas didn’t stand a chance. I even upset my uncle Bob one day, when me and my Aprilia (or should that be my Aprilia and I) left him and his Subaru Impreza in our wake.

The People are Better

Unless you’ve got some Monster Energy stickers and some flashing neon lights on your shitty Fiat Punto (or some similar abomination), you’re probably not going to park up in Halfords carpark to exchange bullshit stories about police chases with your spotty little teenage mates. In fact you are probably not going to go anywhere with the sole intention of talking about cars. Because that’s, well, boring, for want of a better word. Bikes on the other hand, well that’s different. They’re cool as fuck and there’s way more to talk about; that’s why we love going to bike shows, meeting people at bike cafes, or chatting to strangers at race meetings. The most unlikely characters can be brought together (and often are) thanks to the common interest that is motorcycling.

Everyone’s your friend at the bike show or the bike café. There’s certainly no pomposity at bike race meetings, such as you might expect at a car race. No, car people are either chavs or toffee-noses and you’re best off keeping as much space between you and them as possible.

And that is why motorbikes are better than cars.

What is better? It’s a personal choice, something I do not wish to discuss or waste my time over.

I love both, I’ve had fast bikes all my life and love them, but now I feel the fun is gone from the roads and honestly think we got the last of the good times on the road. Unfortunately for us here in Ireland, we only have a couple of tracks to go to, unlike the abundance of tracks ye have in the UK. In relation to cars, I don’t have any of the newer stuff, my E46 M3 definitely keeps me happy, and it’s only going up in value, but really, that doesn’t matter as I’ll never sell it. So the point is, there are people out there who love bikes and cars.

Funny you should use the image of the Fiat Multipla to illustrate this, I’ve always been struck by how much it resembled the styling of the early gen Ducati Multistrada. For instance: 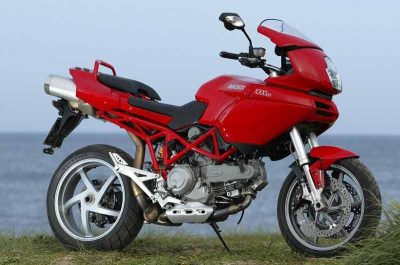 May i add 1 more reason please.. Summer rides by the seaside, particularly in Greece or Sicily 🙏
Greetings from 🇬🇷

4
Reply
Search Our Articles
Past posts