Why every motorcyclist needs to own a van

VanVlogs3
Once upon a time I bought myself a van. It was about 10 years ago and I’ve never, ever looked back. In fact you...

Once upon a time I bought myself a van. It was about 10 years ago and I’ve never, ever looked back. In fact you could ask anyone that’s ever bought a van and they’ll all tell you, without hesitation, that it was the single best four wheel purchase they’ve ever made. Probably. After all, a van can do everything a car can do, but a car can’t do everything a van can. Not by a long stretch. No, that’s why every motorcyclist should own a van. But just in case you’re not convinced, here are another handful of reasons why chopping the car in for a van is a good move…

Ok, that’s not strictly true. I squeezed a trials bike in the back of my girlfriend’s VW Golf once (she went ape-shit) and I’ve seen kids go mini-moto racing with their bikes in the back of people carriers. But as far as ‘real’ bikes go, it’s not going to happen. A decent sized van though, will fit just about any bike in the back. And whilst you might prefer to ride your bike to wherever it is you’re heading, sometimes that’s just not practical. You might need to drop it off for an MOT. You might be heading to a trackday; it’s not always the best move to ride your bike to a trackday, spank it round a track all day and then rely on it to get you home. Sticking it in a van is a much better move.

And if you’ve got a bike in the back of your van, it’s like having your very own mobile garage. You can take your bike, or a couple of your bikes (and the appropriate kit) with you wherever you go. You might be miles away from home on a work trip, or on a weekend away with the family, but you can still get your bike out and go for a ride. If that doesn’t sell it to you, I don’t know what will.

Vans are cool in the 21st century

Lamborghinis and Ferraris are so five minutes ago, aren’t they? If you’re driving one down the street, most people will automatically think you’ve got a small penis. And they’d probably be right. No, in the same way that a ‘dad-bod’ is now considered sexier than a sixpack, owning a van is where it’s at. Before long, there’ll be popstars and footballers from here to Australia flooding Instagram with pictures of them in their vans. When that happens, you can rest assured that the prices of Transits, Vitos, Transporters and Vivaros will skyrocket. So don’t leave it too late.

Because you won’t regret it. Within hours of owning your own van you’ll start becoming more attractive to the ladies. People who previously thought you were a bit of a knob will slowly start to change their minds. You’ll be respected.

Plenty of folk dream of one day owning their very own motorhome. You could travel the globe, sleeping where you parked, only returning to civilisation to stock up on beer and cigs. That truly would be the life of riley, wouldn’t it? But hang on a minute, what’s a motorhome got that a van doesn’t? Apart from a chemical toilet, a shower, cooking facilities, a fridge and a TV; nothing! Apart from those few minor luxuries, there is absolutely no difference between a van and a motorhome, whatsoever. Except for the fact that your gas-guzzling motorhome is probably going to use twice the fuel of a normal van.

Modern vans are as nice as anything to drive

Gone are the days of old diesel vans struggling to start on cold mornings. Clouds of black smoke belching out your Transit’s exhaust are a thing of the past. Nowadays, most modern vans are as lovely to drive as a new family car, and some are even better. Today, most van drivers can look forward to basking in their airconditioned drivers seat, with cruise control enabled and the wireless pumping tunes out, directly Bluetooth’ed from their smartphone. All whilst enjoying a 40mpg fuel economy (well, ‘up to’ 40mpg).

An un-ladened van will out-drag plenty of other road vehicles from traffic lights, and be capable of 100mph, if you need it to be. There’s only one reason they use vans rather than cars to build ambulances on; and that one reason is performance.

Or if you have at least owned one at some time. Because for some, riding a bike is a mere pastime. Something to do on a weekend to get them out the way of the wife and kids for an hour. You don’t need a van for that. For some people though, motorcycles are one of the most important things in their life. It sounds quite sad when you put it like that, doesn’t it? But it’s true for a lot of people. Myself included. If your life revolves around motorcycles, which it does for anyone who races them, you’ve got to have a van; you need somewhere to sleep when you go racing for a start.

But that’s not all. Plenty of us dyed-in-the-wool motorbike boys and girls simply need to be on a bike at every opportunity. Terrible things happen if we don’t. That might mean throwing an off-road bike in the back of the van and heading to an MX track. It might mean heading out for a last minute track evening somewhere. You’ve got to have a van at your beck and call to do that shit.

So if you want to up your bike game, there’s only one thing for it. Sell the Mondeo and get yourself a van. The grass is greener on this side. After a year of owning a van, you’ll wonder how you ever coped without.

Very true, even if you can’t afford a Van outright or don’t need one the whole time. Why not part share a van, that’s what I did with my mate…… never looked back.

T4 and a Drz…. nuff said (but yeah vans and bikes go hand in hand)

Vans are to expensive to own. So i bought a 400€ trailer.

And pull it by hand?

I just bought a Transit 250 high top. I already am trying to figure out how I made this far without a van.

Racing, track days, trail riding in the Pyrenees … couldn’t live without my van 🙂 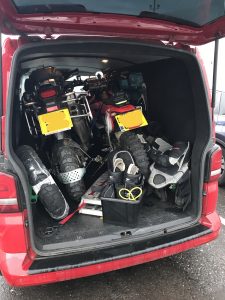 100% agree with this. Couldn’t manage without a van now