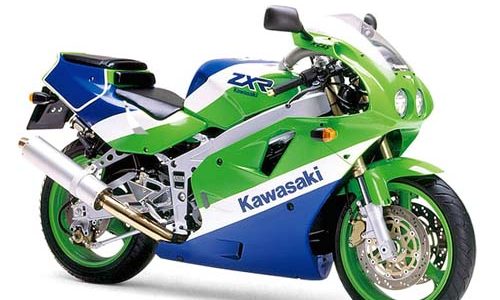 Would you ride a modern day Kawasaki ZXR400, if they were as good as they used to be in the 90s? I think I would. And we might just get the chance to soon, because rumour has it, Kawasaki have got a model ready to launch that might hark back to the ZXR400, and their going to call it the Ninja ZX-4R.

Of course there’s absolutely no guarantee that if Kawasaki do launch a ZX-4R, they’ll import them into the UK. Kawasaki (as well as the other Japanese factories) still make models that are specific to the Asian market, like the ZX-25R for example.

If you’re not sure what the Kawasaki ZX-25R is, it’s a 249cc four-cylinder four-stroke, with 50bhp, a tubular steel frame and it weighs 182kg. And that’s relevant because by the sounds of things, the Ninja ZX-4R will be quite heavily based on the ZX-25R. That’s to say it’ll have the same frame, swingarm and similar bodywork.

If it does happen, I’d expect them to go with a green ZX-10R-esque paint job. But it would be lovely to see something slightly more retro, like the old Kawasaki ZXR400 scheme.

Obviously the engine would be different; I’m hoping it’d be something like the engine in the old Kawasaki ZXR400 models from yesteryear. Anyone who’s ever owned one or even ridden one will know they were cracking little things to ride. They might have only had about 60bhp but the combination of the super-revvy engine and lightweight chassis made them a right laugh to throw round corners. And that’s why, back in the late 90s and early 00s, every dick and their dog was racing one; the Formula 400 racing class was always packed, wherever you went, and quite often packed with ZXR400s.

The problem is, small, high-revving four-stroke motorbike engines don’t lend themselves to modern euro emissions regulations. Just look at the supersport 600 sector (or what’s left of it). Going off how fast ‘supersport’ bikes were in the mid-00s (120-odd-bhp), you’d expect them to be making 140-odd-bhp now. But they’re not. They’ve gone the other way thanks to being castrated by modern emissions laws, and are now nearer 100bhp. That’s why the sectors died a death.

And you can only imagine it’ll be even more difficult for a 400cc inline-four ‘supersport’ machine to get through the regs with anything like sensible power figures. It’s a real shame because a revvy little 80bhp inline-four sports bike that weighs 180kg would be an absolute weapon of a bike. It would also be a bloody cracking starting point for a track/race bike. But I think 80bhp is being a bit ambitious.

Perhaps Kawasaki will prove me wrong and the ZX-4R will be every bit as exciting as the ZXR400 of yesteryear. But if it is, I’d bet my bottom dollar they won’t bother exporting them to Europe. Maybe we’ll see a resurgence of ‘grey imports’. Let’s see what happens.

I have the same ZXR400 H2, as your bike in the photo. It’s so much fun to ride. Very involving.

Having something of the same ilk, without the issues with E fuels would be an advantage too. 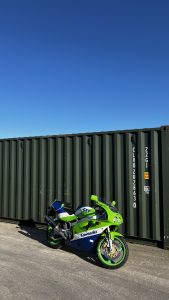 First road bike was a ZXR 400. Loved it. Maxton revalved and respiring the rear suspension. I jacked the rear up as high as possible, lowered the front a touch. It was pointy and quick… and didn’t tankslap (much)… an absolute howl to ride. 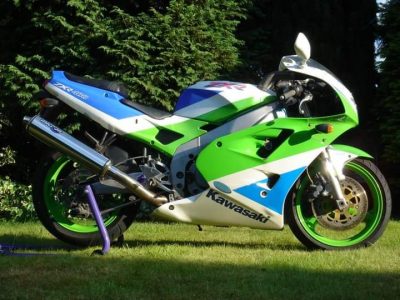 I certainly would be keen on a baby ninja 4. They were one the club-racers favorites in F400. Best of bunch overhaul rounded little bikes. we had years of fun on those roarty kwakers. Great entry level bikes which wont high side you at every wif of throttle input.
Learn your craft on these smaller fun machines was where it was at in grey import era.
Cant fault them for hoonabilty and day to day smiles per miles. road or track they all have a place in our hearts.

Bring it on i would say.

I never had a ZXR400 but my second ever race bike (an NS400R was my first one) was an FZR400, and it was an absolute jewel. It went wherever you pointed it with practically no physical effort, yet was completely stable and anything but twitchy. And winding that little inline-4 up to 14,000rpm through the gears was just magical. Sadly, there are fewer and fewer active riders these days who’ve had the experience of a 4-cylinder 400cc sportsbike, so whether they’d have the same appeal to younger buyers now would be the big question.

I don’t know why manufacturers don’t take the second had market as a clue and bring back some of the greatest hits. Upgrade the guts to modern standards but leave their original appearance completely untouched. I’d give anything for a new 916 with V4 panigale running gear, a TL1000R with more horsepower, a bone stock looking ZX-7R with H2 guts etc. Seems like such a layup, especially now that people are paying obscene amounts of money for bikes that are pretty but garbage by modern standards.

If aprilia and Yamaha can do it then why can’t Kawasaki?. I hope for a return of the super sport sector! Will it sell in the uk though?