Triumph Bonneville T100 Review1
It’s a cold, crisp November afternoon. The autumnal leaves garnish the countryside, or something. I’m bloody freezing and my willy has disappeared. Perhaps the... 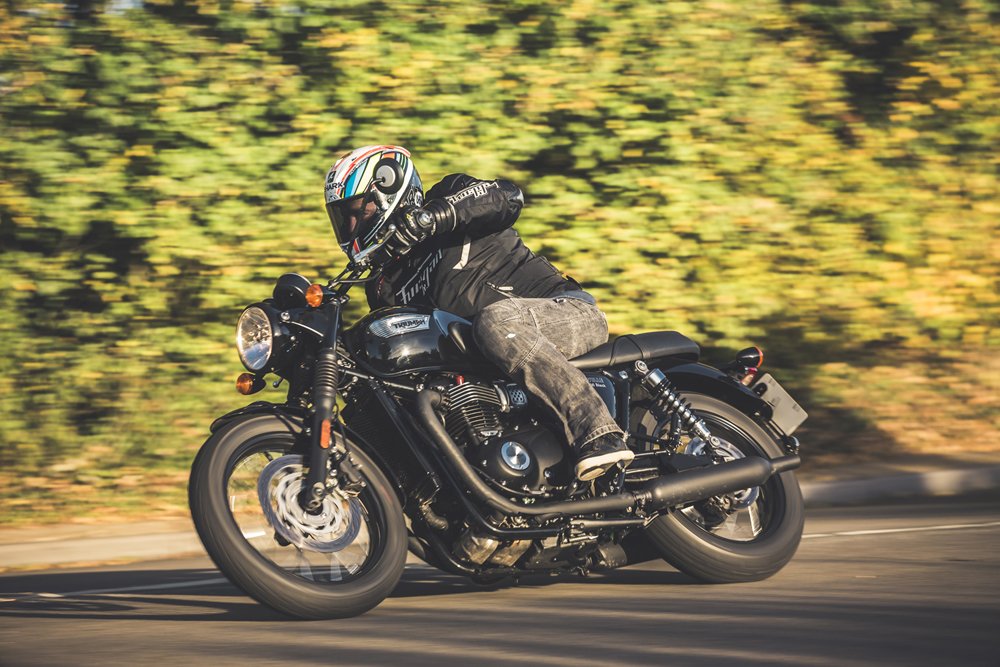 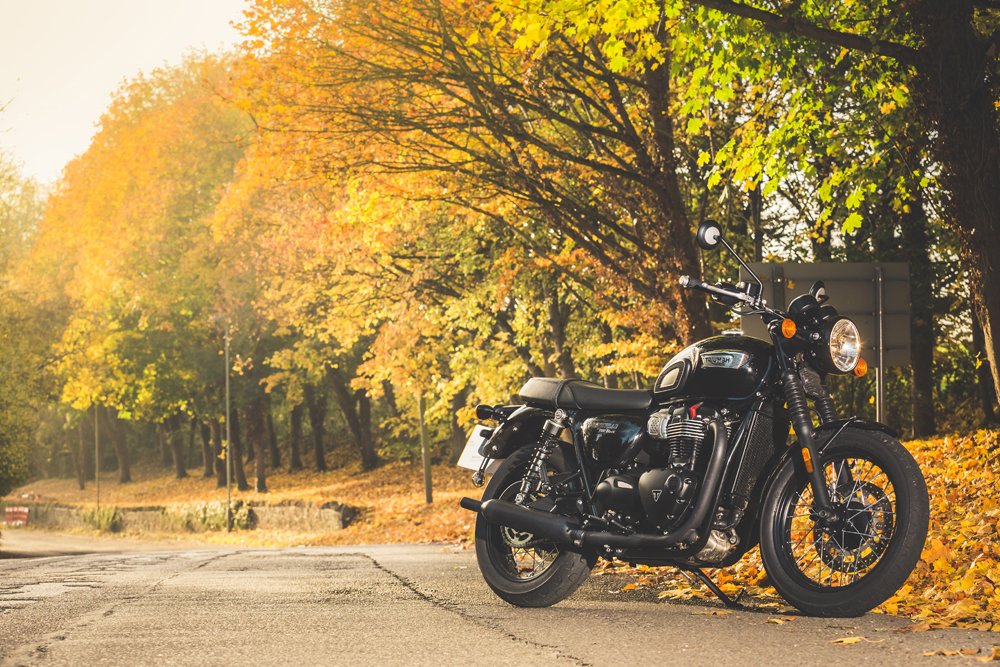 It’s a cold, crisp November afternoon. The autumnal leaves garnish the countryside, or something. I’m bloody freezing and my willy has disappeared. Perhaps the über-vented Alpinestars ankle boots weren’t the sensible option. It’s okay though, because I look cooler than fresh ice cream smeared over the other side of the pillow. Yes, that’s it: I’m riding the new Triumph Bonneville T100 and dressed to impress.

Heavy-hitters in the modern retro sector, Triumph hosted a modest launch of its revised baby Bonne at the factory in Hinckley and we duly accepted an invite. Outside the gates stood an innocuous pair of T100s: a classic blue/white ensemble and the stealthy looking ‘Black’ model, which I was frenziedly drooling over. Essentially, both share the T120’s chassis that houses a 54bhp Street Twin engine, basted in modern electronics to offset the historic cosmetics. In essence, the T100 gets a serious overhaul in all departments.

Here’s some groundwork for you: although the T100 badge appeared much earlier, the original Bonneville started production in 1959, the first generation running until the early 1980s and a second production until 1988. The latest modern retro version was ignited in 2001 under Triumph’s current guise and continues to flourish. In fact, it was so good, the salt flats in Utah were named after this iconic motorcycle, and Hinckley looks set take advantage of a booming scene. 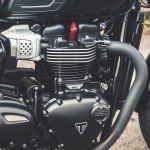 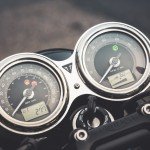 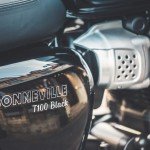 Within moments of leaving the factory I was lusting after the T120’s heated grips. Or Spain. Spain’s nice at this time of year. As you’d expect from a chic roadster such as the T100, the saddle height is super-low and will accommodate a range of riders with an anorexic midriff. It’s a supremely relaxed and very comfortable riding position for my 6ft frame, and our 120-mile ride started pain-free.

Heading out of Hinckley and slicing traffic, it was apparent that this is a ridiculously easy bike to ride, well-balanced, neutral and lacking idiosyncrasies. The controls are fluid, intuitive and light on the fingers/toes. Triumph’s latest generation ride-by-wire provides a soft-but-direct-enough throttle response that’s obedient no matter where the needle sits, happy to dawdle in urban climes and poised for a spontaneous spanking. The 900cc parallel twin oozes silken manners and buddies up with the electronics to provide a crisp connection to the rear wheel. I’m impressed.

Like many bike of this ilk, there’s an inherent lethargy seeping through the ‘bars that’s transferred to the pilot, exuding a calm outlook that negates stupid speeds and dangerous riding competitions. This ain’t a bad trait.

As the roads opened up, I’d completely neglected the fact I was riding something that delivers fashion over form. Despite the aesthetics, it’ll still hustle with brazen intent, if somewhat sluggish during change of direction – nothing astounding given its 213kg performance on the scales. The T100 still responds with minimal input and its hefty mass undeniably lends stability in abundance and mechanical grip to the mix, sucking it into the road. I was soon reminded of its status – and complete lack of ground clearance – when tipping into a roundabout. The peg carved what felt like inches out of the tarmac but the bike remained settled. It felt tastily sporty until this point. 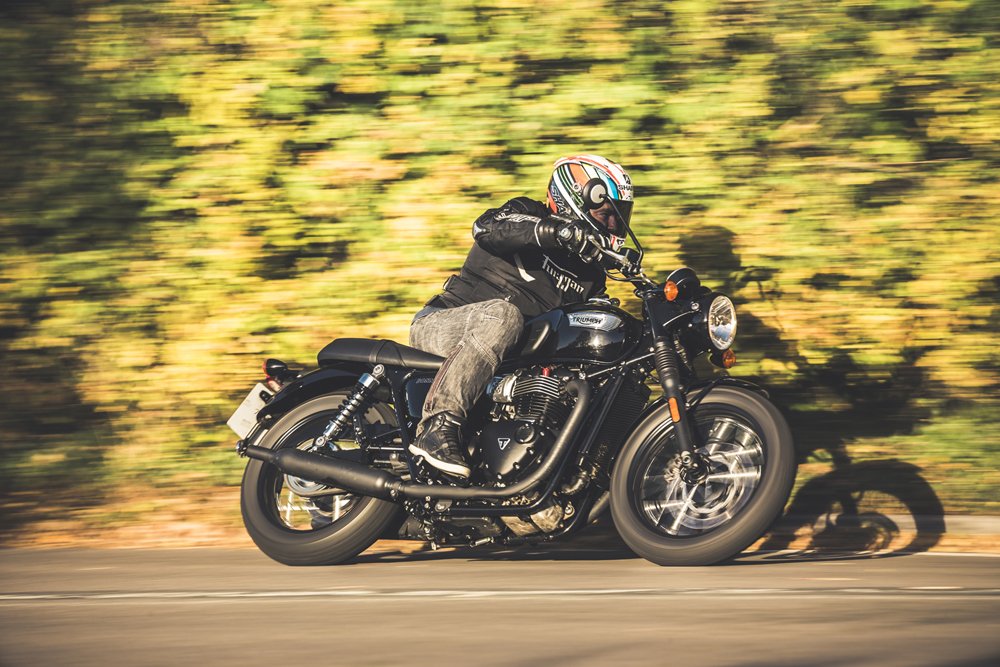 Aside from its deluxe arsenal during the early stages of our relationship, the Bonneville’s key facet was its suspension as the pace was upped. Low-speed damping and the initial stroke feels very expensive – a contrariety to the budget appearance – and only the nastiest of swells provoked a need for more travel and a salad diet. It’s plush, soft enough for UK detritus without wallowing.

Quite often we see financial restriction hinder components, yet there’s a sumptuously sophisticated approach to corner entry aboard the T100. Stopping power is nothing more than adequate, even with its single disc, and chopping the throttle is governed smoothly by a slipper clutch that always seems to provide the perfect amount of engine braking. I guess that, even after 50+ miles, I was still surprised at the T’s aptitude and tekkers.

Following lead rider, Luke Bowler (formerly off of the television) on his Tiger 800, the lil’ Bonne was always going to feel lacklustre in this company. In isolation, it’s a bike that thrives on gears being constantly consumed in the midrange around 4,000rpm, surfing that flat torque curve and soaking up the ride. It certainly doesn’t make sense to hassle the limiter. 54bhp doesn’t sound overly appealing, the delivery is quite muted and soft, and the T100 will hardly sever your banjo, yet there’s enough punch and character to enthral most riders. There’s also sufficient shove (just) for overtakes that border legal speeds, although a certain amount of commitment and pre-empting is required. And, according to sources, it’ll wheelie in first gear with a healthy dose of clutch and throttle abuse. 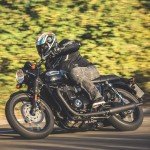 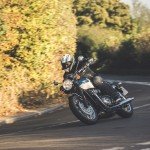 Although dry, temperatures remained well into single figures, but there were no nasty surprises throughout the day. I’m not going to sit here and sycophantically rave about the electronics suite. Its purpose is far more safety than performance, although having spanked a Thruxton R at a circuit not so long ago, I can vouch for Triumph’s latest grafting in the tech department. And there’s a bloody USB socket for vapists and those with iPhones.

As we dissected the bustling high street of Burford and consequently got told to ‘fuck off and die’ by a vile primary school kid whose parents need slapping, promiscuous eyes descended on the T100. It’s a bike that unconditionally attracts attention, epitomising what this sector is all about. Ultimately, dynamic impressions matter little here. The T100’s styling is the seller, and Triumph simply doesn’t make shoddy bikes anymore. 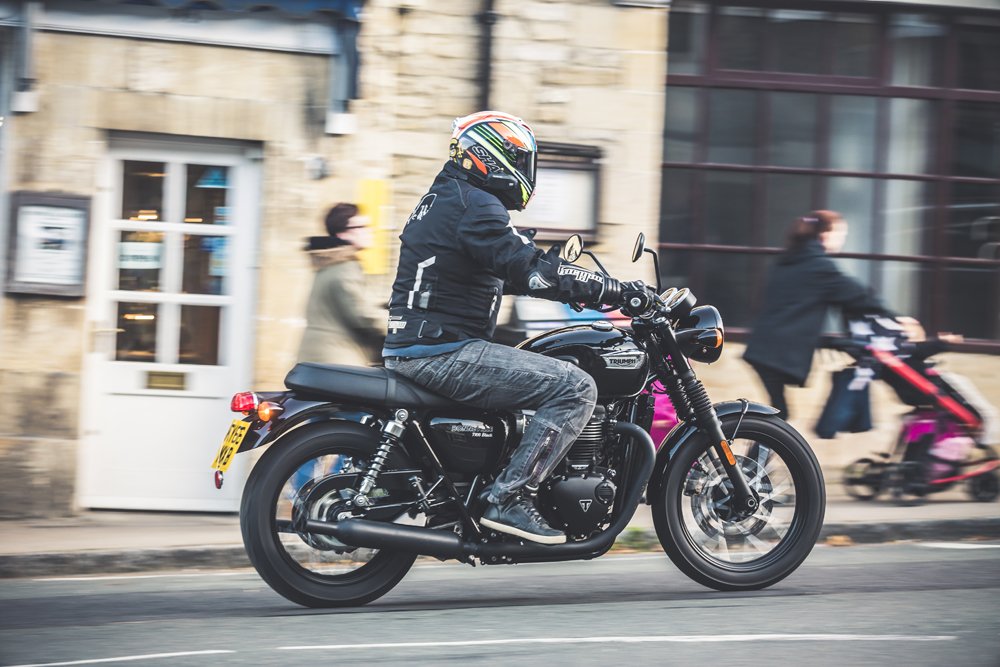 How about some trivial practicalities? Well, the Mickey Mouse mirrors are bloody excellent; we managed well over 100 miles with its 14.5 litre tank; in keeping with the rest of the bike, there are next to no vibes, and an 80mph cruising speed is perfectly acceptable.

£8,300 seems bloated for something so basic. But is it? Despite the heritage pretence, Triumph has dressed the T100 in modern mutton and there’s no escaping its refinement. If you’re looking for something edgy and slightly agricultural, look elsewhere. As someone who has only just embraced the modern retro scene, the T100 is a bike I’d happily own. I’m struggling to conjure up any complaints. There isn’t any bar subjective moans and maybe a lack of noise.

Along with trendy urban types (we can really envisage suits and a piss-pots), Triumph’s baby Bon will no doubt appeal to newbs, made even more attractive with a dealer-fitted A2 option. Likewise, the more mature rider who wants a throwback to their heyday without reliability issues will enjoy the T100, as its parameters reach far and wide. Even me. 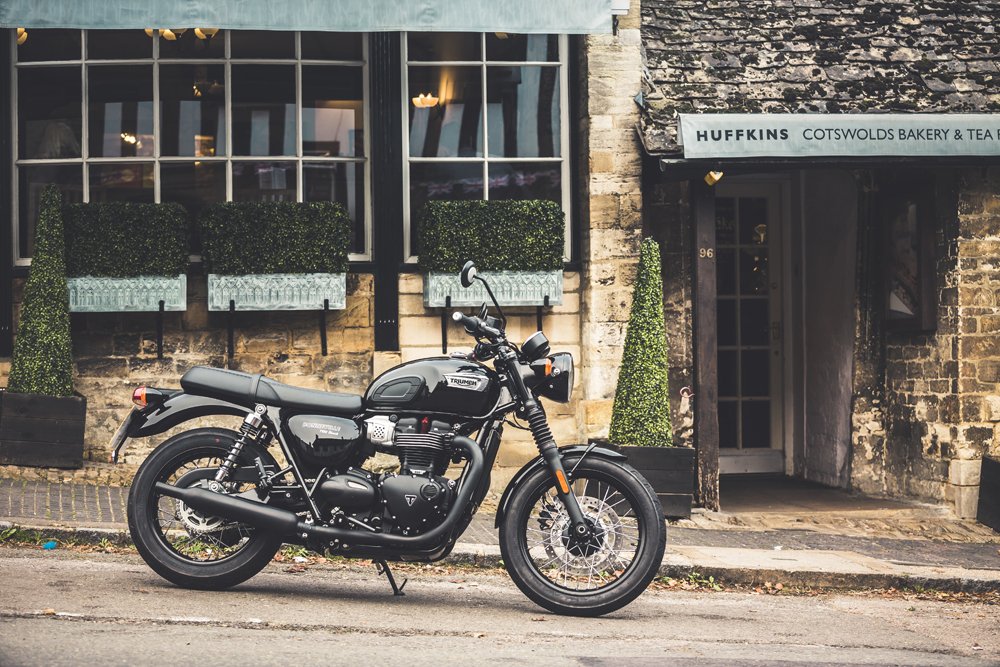