Riding9 Winter2
There is nothing better than getting out on your bike and enjoying the beautiful British weather. Trouble is, we only get about three days... 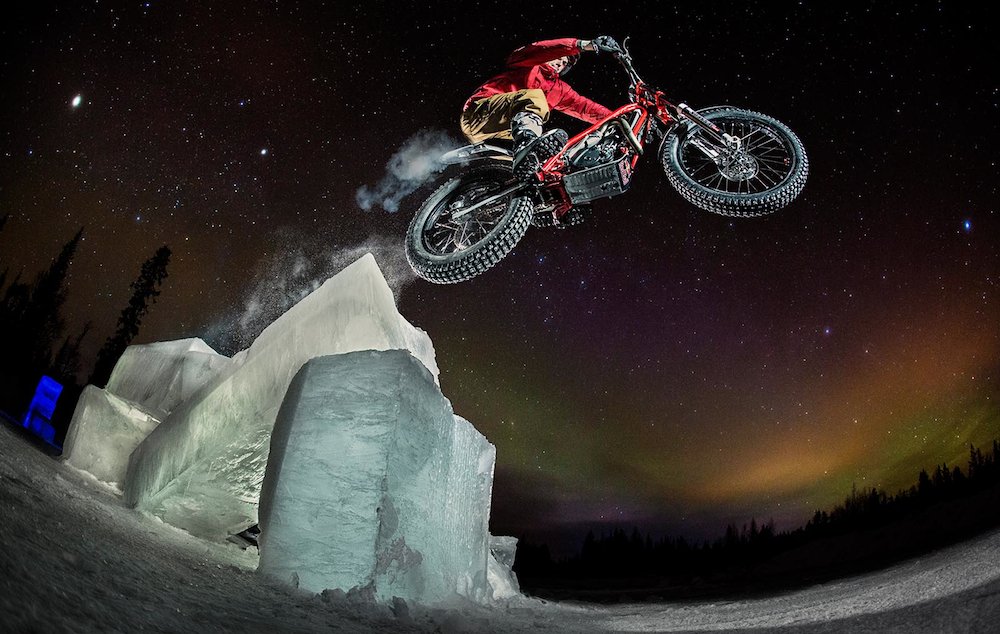 There is nothing better than getting out on your bike and enjoying the beautiful British weather. Trouble is, we only get about three days of it a year, and most of us have to spend them at work. But we’re British, so we don’t complain. Stiff upper lip and all that. We’re happy to make do with the mediocre weather and most of us don’t get too put off by overcast skies and patches of rain. But, come the bleak midwinter when frosty winds doth blow, things change. The days get duller, the temperature plummets and the roads accumulate a slime layer thick enough to need knobblies. So it’s no surprise that plenty of us Brits throw an old bed sheet over our bikes, hang our helmets up and wait until spring has sprung before we drag our bikes back out to see if they’ll start. But it doesn’t have to be that way. We don’t stop riding in winter and we don’t want you to. So to help you stay on two wheels 365 days a year, we’ve sussed out a few tricks. This is five of the best ways to keep riding in winter…

If you’ve done much riding in winter, you’ll know you don’t have to go off-road or get caught in a rain shower for it to come home looking like someone’s taken a dump on it. The gross road surface will do that for you. But fear not; if you can be arsed to clean your bike properly, there’s no reason you can’t enjoy it all year. Granted, you’re going to want a few extra layers on. And, and those summer gloves probably aren’t going to cut the mustard against 60mph’s worth of wind chill, either. But if you get wrapped up properly you’ll be laughing.

You might not be laughing when you get home and you see how many of your bike’s surfaces are now coated with salty, slimy shite. But if you get to work straight away, with lots of water and bubbles, you should be able to clean most of it off before it does any lasting damage to your pride and joy. And don’t be scared to take the bodywork off and give all those hidden areas a good scrub, you won’t regret it.

I’m not talking about staying inside and playing MotoGP 2000 on your PlayStation 2; although I can think of worse ways to spend a winters afternoon. I’m talking about getting to one of the many places across the British Isles that facilitates indoor motorcycle riding. OK, I’ll level with you, there aren’t that many. But there are a few dotted about if you know where to look.

For those in the south there’s Wheeldon Off-Road Centre. The Scots have got i-MotoX, the indoor electric motocross track in Glasgow. And then there’s Champions Flattrack School in Lincolnshire who’ve got an indoor track too. Not only that, over the last few years, thanks to the rise in popularity of pitbike and minibike racing, more and more go-kart tracks are opening their doors to two wheeled machines. Even if it is only every so often. You’ll probably have to buy yourself a pitbike or something if you want to go down that route. But they’re not dear and you’ll have a right old laugh on it. If you fancy a bit of it, it’s worth checking with your local kart track.

Want to keep riding in winter but don’t like the idea of coating your beautiful, six-month old superbike with mud, salt and acid rain? That’s fine, you don’t have to. I know this might seem a little extravagant, but why not buy another bike, just for the winter. If you spend a grand on an old rotter at the beginning of the off-season, when the used bike market’s slow, you’ll probably find that you could sell it in the spring, when the market picks up again, for just as much as you bought it for. Maybe even a bit more. Doing that means you can ride as much or as little as you want over winter. You’re not going to worry about getting caught in the rain or splashing through muddy puddles and you might even make a few quid on it, if you’re lucky.

Bike number two might not have as many bells and whistles as you’re used to but so what? That’s a small price to pay to keep your number one bike in tip top condition. If you can fit another bike in your garage, why not give it some thought. And if the missus gives you twenty questions about it just tell her that A. You’re protecting your assets, B. It’s an investment and C. It’s about time she started minding her own fucking business, anyway.

This is a no brainer and if you’re not doing this already than you should be. There are a million and one reasons to ride off-road, the main reason being that it is a right laugh. It doesn’t matter whether you’re flat out on a motocross bike, bouncing around on an enduro bike or hopping over a fallen log on a trials bike (or at least trying to); there are hours of fun to be had. And you needn’t worry about getting cold, as even the most avid gym goers will be sweating buckets after an hour or so on an off-road bike.

If you’ve never done any off-road riding before, you’ll probably find that it takes a bit of getting used to. But once you do get the hang of it, you’ll almost certainly find that your road riding improves too. Particularly in the wet. There are a ton of places to ride off-road bikes all over the country. And even if you have to book a place on purpose built mx track, it’ll be a sight cheaper than a trackday at even the most Mickey Mouse road circuits. Cheap as chips and a great way to keep riding in winter.

This is my favourite one on the list. And it’s the one that makes the most sense. Or it would if we didn’t all have jobs. That said, if you ask me it’s worth grafting through summer and saving all your holidays ‘till the winter time, so you can get swap the crap weather for some Spanish sun, skids and wheelies.

There are lots of places you can go to keep riding in winter and avoid the British winter, but Spain’s the closest (and therefore cheapest). It’s got a reasonable climate and a shit load of opportunities to ride bikes. There’s a race track in nearly every town with trackdays running all through the year. There’s off-road riding trails aplenty and mountain roads that you could ride all day long without seeing a single pothole. Why not spunk all your annual leave on one trip? Spend a month over there and have a go at it all? Trackdays, motocross, you could even learn to ride a Supermoto bike. It’s a yes from me.