Brands Hatch4 British Superbikes18 Kawasaki H2R4 review50 test15
When you get offered a chance to ride the most ridiculously powerful and excessive production bike ever created, you say yes – even on... 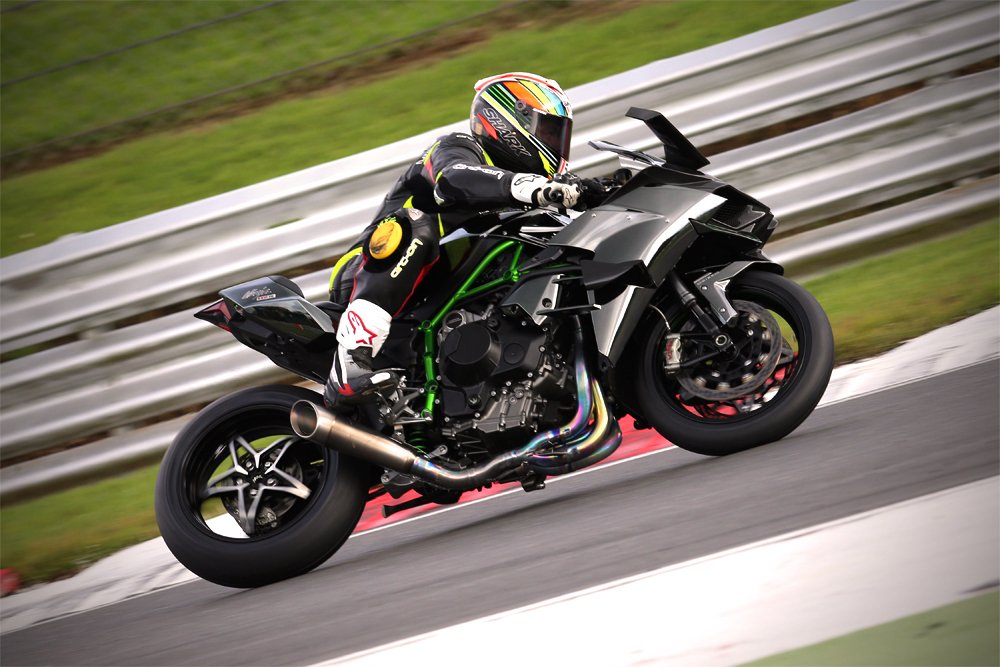 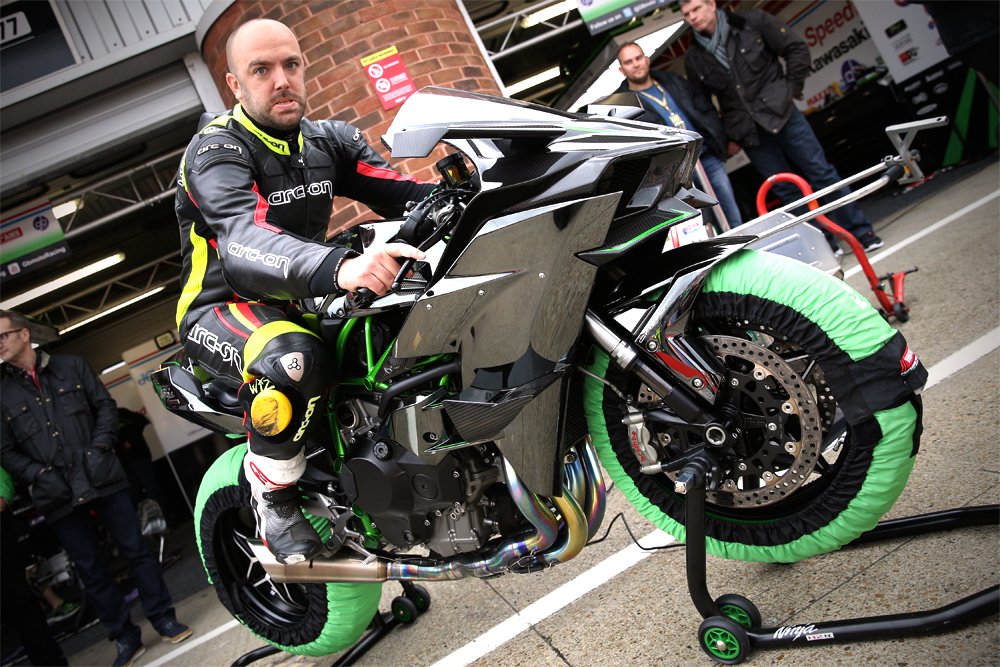 When you get offered a chance to ride the most ridiculously powerful and excessive production bike ever created, you say yes – even on a cold, damp, murky autumnal day in front of 30,000 expectant race fans. Kawasaki’s supercharged H2R has owned 2015 in terms of horsepower and willy-waving statistics, so it was only prudent that we understood what all the fuss was about.

The H2R roadshow has been present at several British Superbike rounds this season, ridden by a feast of racing legends…and 44Teeth, and the finale at Brands Hatch GP circuit proved to be our chance to sample some of this supercharged silliness.

After a miserable weekend of racing activities, only a 300bhp Ninja flavoured rollercoaster could remedy this torrid comedown. And there it was, sat resplendently outside James Ellison’s GB Moto garage magnetising onlookers with that chromey, almost mirror-type paint and onslaught of carbon fibre. As many have commented on, you have to see an H2R in the flesh to truly appreciate the architecture. I wasn’t sure on whether to stroke it or ride it.

The plan was simple: two or three laps (depending on how generous race direction was feeling) and look as sexual as humanly possible for the cameras. When Kawasaki bosses ask you to bring it home under its own steam, not in the back of the recovery truck in several pieces, a certain amount of caution is heeded. At the same time, the 30,000 fans who paid for a ticket at Brands Hatch don’t want to witness some numpty wobbling around.

After several delays in the Junior Superstock race, our ‘demonstration’ laps were pushed back to 14.30, which meant even more trepidation and time to overthink any potential deathly eventualities. By this point, I’d been in my leathers for nearly three hours. Passers by were looking at me like I was some crazy person on day release. And one of James Ellison’s mechanics then wondered out from the garage and asked if I had any earplugs. Oh shit. Is it possible for ears to prolapse? 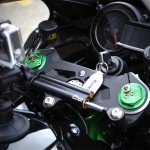 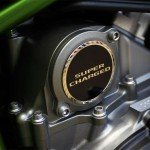 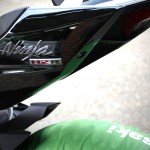 When a Kawasaki H2R starts up, the surrounding miles take notice, reverberating around Brands’ amphitheatre like nothing I’ve experienced. Even throughout idle (more of a vehement tickover), its menacing gargle makes a superbike sound like a wet fart in comparison, and its raucous soundtrack is something I’ll never get tired of absorbing. Yes, it’s an inline four, but that open exhaust and angry, dissident tone with all the additional pops and bangs set the scene.

There’s nothing refined, fluid or welcoming about the H2R. The whole bike shakes and shimmies at a standstill with just a hint of throttle applied, the tank sways from side to side in protest like it’s an afterthought. Its sole purpose in life is to chew up the surface beneath as quickly and as violently as possible, only truly content with the throttle pinned. That said, it bloody well handles.

Eventually I got the nod from BSB officials. Waiting patiently (and pooing it slightly) at the end of pitlane, the easily engageable launch control was a must for entertainment purposes. There was a fleet of fascinated marshalls and medics gazing over the barrier who were soon running for cover and a St Johns ambulance when LC was initiated. Pin the throttle, revs are electronically held at 8,000rpm, and trust is firmly placed in these electronics. 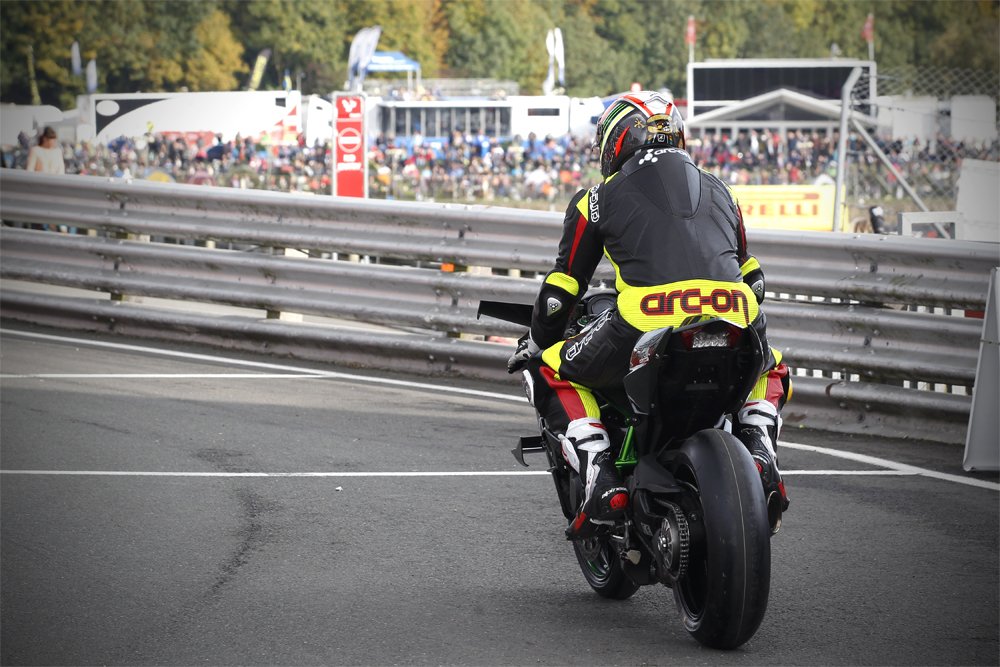 Despite being sat on warmers for well over an hour, the first few corners weren’t exactly pleasurable. There were still plenty of damp patches scattered across Brands Hatch that got the bumhole twitching overtime, and Bridgestone slicks aren’t exactly renowned for their unscrubbed performance. And then there was the small matter of taming 326bhp…

You can’t disguise the H2R’s atrocious fuelling and throttle connection, but this only adds to the riding sensation as an obvious by-product of the supercharger. The first few thousand RPM is fluffy and unpredictable, making slow speed sections a little sketchy to say the least and ultimately hampers mid-corner stance. You’re never quite sure exactly when power – and how much – will be transferred to the rear wheel, such is the blower lag and iffy closed-to-open throttle. Choosing a lower gear that sanctions the boost is one way of skirting the issue.

Those who lament electronic rider aids on bikes like the H2R are obviously deluded. The road-going H2 is a handful with ‘only’ 200bhp, relying on anti-wheelie to thwart looping and certain death. Brands Hatch’s abundance of swells and undulations would make the H2R unrideable without such delicacies, although rarely did I see any TC intervention lights flash up on the dash – mainly through caution.

Heading into Paddock Hill, which is scary at the best of times, the H2R needed little encouragement to meet the apex. Turn-in speed and stability is sublime, although its 216kg mass is permanently evident along with its physical presence and massive frontal section. How could such a carbon fibre shod beauty bust the scales with such force? It must be all those supercharged workings. 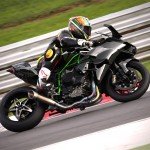 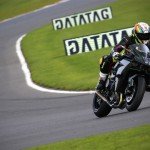 It steers and turns like any conventional sportsbike with plenty of front-end confidence, so long as the throttle isn’t open. Probably due to stability concerns and public safety fears, the geometry is quite relaxed for a ‘sportsbike’, not that you could tell. Well, a culmination of its raw speed and eagerness to point skywards, plus its weight and geometry make changing direction a physical workout to accompany the mental exertion. The constant chime of anti-wheelie subtly kerbing the H2R’s enthusiasm over the lap was the only thing saving me, and the only thing allowing the throttle to remain pinned.

But just how fast is the H2R? Incomprehensibly fast. Nothing can prepare you for the furious manner in which it accelerates, supplemented by that naughty soundtrack. For obvious reasons associated with bragging 300bhp, the horizon is gobbled up sooner, your peripheral vision and brainpower take an absolute battering, and my braking markers had to be rethought after a weekend of racing a mincy little 899 Panigale. I saw 162mph on the dash (from the onboard camera, not in realtime – that would be stupid) in fourth gear on the run into Hawthorns before grabbing a fistful of Brembos, yet it’s the method in which it reaches those speeds that’s so captivating. Do you think those carbon winglets are fashion accessories? No. They’re present to prevent take-off at over 200mph and, incidentally, cost £1500 a side in case you were wondering.

A claimed 326bhp equates to around 250bhp at the rear wheel. Fast Bikes had this very machine on the dyno and it attempted to chew said dyno to pieces, and an accurate reading proved ineffective. My botty dyno couldn’t argue with Kawasaki’s claims as it incessantly endeavoured to wheelie with every whiff of throttle, including random points prior to braking zones – as you’ll see from the onboard. 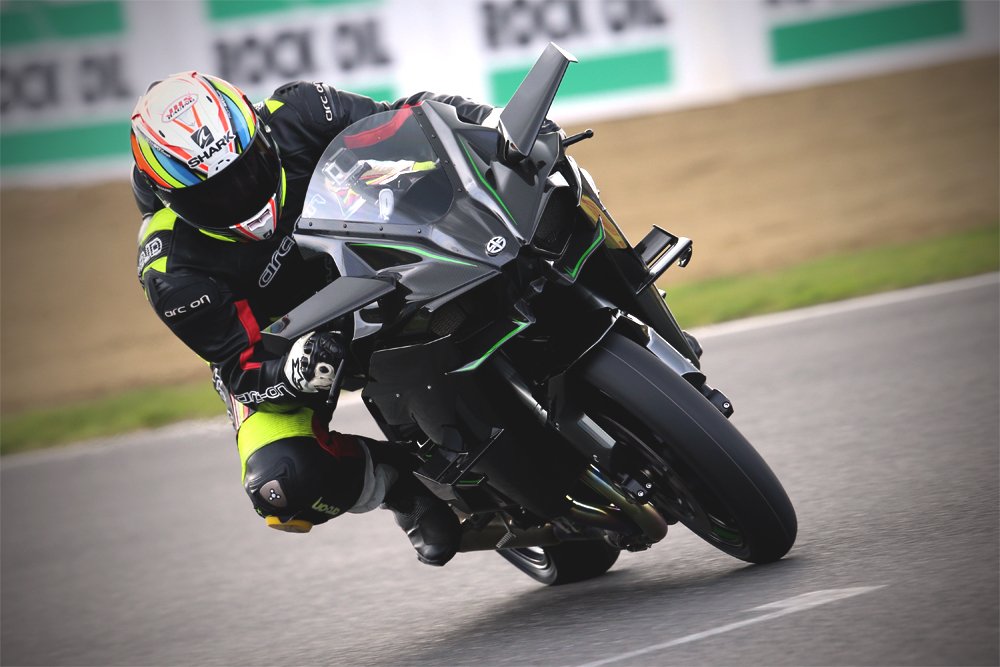 British Superbike racers trying to earn a wedge by lapping as fast as possible: they’re welcome to take the risks, pushing the limits of adhesion on bikes they’re accustomed to and putting on the show they do. I was merely praying for some crash-free lappery. Halfway round the second lap, arm pump was starting to materialise through purely holding on and wrestling 216kg round Brands’ GP layout. The front brake lever felt like it was a metre away and throttle application became heavier and clumsier. Thank gawd for the chequered flag.

As I’ve said on previous occasions, it’s like having the world’s biggest penis and only being able to utilise a few inches. We’re sure most of us would go faster on a 100bhp shithouse that cost a fraction of this supercharged joyride, but it’s certainly not about lap times. ‘Built Beyond Belief’ was Kawasaki’s slogan on launching the H2R, and I was left beyond belief after sampling one. It’s not often I’m reduced to a gibbering wreck and struggling to annotate riding dynamics.

The negativity surrounding the H2R can only be triggered by jealousy: those who could never ride one or afford to ride one, which I understand to some extent. Yes, it’s a rich-boys’ toy at £41k. Yes, it’s a rolling melange of needless horsepower and exotic materials. No, the human gene isn’t ready for this type of sheer lunacy. But who cares? In a world of cotton wool wrapping and health & safety, it’s also exactly what motorcycling needed.

How to build the perfect motorcycle. - 44Teeth | Motorcycle Lifestyle

[…] really fast so there’s only really one option. The perfect motorcycle needs to be powered by Kawasaki’s H2R motor. I know 320-odd bhp and 165Nm of torque is probably bordering on overkill. The throttle works […]

Modern motorcycle tech. Is it worth it? - 44Teeth | Motorcycle Lifestyle

[…] softer power map has helped the job, especially when it’s cold and damp. But I’m talking about 200bhp+ bikes, here. If you’ve only got half that amount of power to start with, there’s no way you should […]