Retro Kawasaki | Back to the future

If you watched WSBK from Argentina at the weekend, you’ll have seen Jonathan Rea and Alex Lowes on some fairly retro looking ZX-10RRs. If you didn’t see WSBK at the weekend, you still might have seen pictures of their bikes floating around social media. But it wasn’t just a mindless publicity stunt from the Kawasaki Racing Team. They’d had orders from the top. The retro colour schemes were to celebrate 125 years since the founding of the Kawasaki company, the adoption of a new logo and the creation of a new company within the Kawasaki Heavy Industries Group.

Painting a couple of modern race bikes in 80s and 90s colour schemes is a good way to celebrate anything. Especially if one of them is in the green, blue and white of the ZXR750-H. That was Jonathan’s bike, and he even had the retro leathers to match. Beauty is in the eye of the beholder, isn’t it, so I’ll let you make your own mind up about the GPz900R inspired livery on Alex’s bike; but it’s a no from me.

I’m not entirely sure how Kawasaki convinced all their sponsors that it would be a good idea to remove all their logos from the race bike, but I suppose that’s not my problem, is it?

When Shōzō Kawasaki set up the Kawasaki company in 1878, it was just another shipbuilding company. Eventually though, they expanded into civil engineering, trains, steam engines, and aircraft. Now, as well as bikes and boats, they’re even building stuff to fire into deep space. And because Kawasaki as a company is so vast, they’ve formed a new company within it, called Kawasaki Motors Ltd. The mission of the newly formed Kawasaki Motors Ltd. is ‘to deliver the greatest range of powersports products on the planet’ and to ‘let the good times roll’. You can’t argue with that.

Whilst they are having this shake up, they’ve decided to ‘rebrand’ a little bit with a new logo. Actually, it’s not really a new logo at all. The River Mark symbol, which is ‘a stylised symbol of the Japanese character meaning river’ was seen back in the 1870s when Shōzō Kawasaki would hang flags on his ships with the River Mark emblem. Since then, it’s use has been reserved for Kawasaki’s most significant products. You might have seen it on a Ninja H2R.

But from now on, you’ll be seeing a lot more of it. That’s because Kawasaki have adopted it as their Corporate Identity symbol (or logo, for short).

So now you know. That was the reason Kawasaki decided to go retro with JR and Lowesy’s bikes at the weekend. It wasn’t just because it looks cool as fudge; even though it is.

If a Kawasaki isn’t green I don’t want one. I looked at them around 2016, a ZX10R it was too, and an anniversary edition at that, but not enough green. Back in the 1998 I bought a ZX7R, to all intents and purposes an updated (slightly) ZXR750. Kawasaki green and white panels, just like Chris’s in the first BBB. It was a tad out of date even then as a superbike, but it was one of the best bikes I’d ever had, and still is to this day, which is why I had a look at Kawasaki’s around 4 years ago. Alas, Kawasaki’s looks have been rather lame for several years now, but come up a real treat in green. O.k, looks aren’t everything, but last year I bought a Panigale V4. O.k, only red was available, but would I have bought a white one a few years ago? No way! I know someone bought a yellow 916 a while back (wink), but yellow is for Triumph Daytonas (tee hee). Pic’ taken in 1999. Check out the Jamie Whitham Scream helmet. 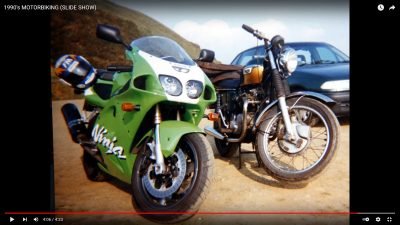