Reasons to keep your bike in the living room

Are you married? Do you have a significant other? Or do you live by your lonesome? You may think that to keep your bike...

Are you married? Do you have a significant other? Or do you live by your lonesome? You may think that to keep your bike in the living room you’d need to be the consummate bachelor. But I’m here to tell you that you don’t. All of us at 44Teeth have spent plenty of time living with bikes in our living rooms, offices and/or bedrooms, and we’ve all turned out absolutely fine (cough). So you mustn’t let anyone tell you to banish your bike to the garden shed.

But in the real world there are plenty of wet blankets that’ll say “the house is no place for motorcycle”. That’s why we’ve put together this list of our Top 5 reasons, in no particular order, to help you persuade anyone that you might need to, that it’s time to bring the bike indoors. Arm yourself with these bad-boys next time the missus starts giving you jip, and you’ll never need a garage again.

Fluctuating temperatures are less than ideal for any organic material, not least of all rubber. Just like firing umpteen heat cycles through them with your tyre warmers at a trackday, sub-zero temperatures, night in, night out are definitely not going to do your hoops any good. Ok, if you’ve got a temperature controlled, MotoGP spec workshop you might be fine. But for the vast majority that keep their bike in a brick garage, wooden shed, or any type of unheated outbuilding, it’s worth playing this card.

After all, it’s a question of safety; you don’t want your only connection with the tarmac to be compromised. Especially not the first time you take your bike out for a spin come the beginning of the new season. You want, nay, need that rubber to be in tip-top condition to ensure the safety of yourself and those around you. And the only way to do that, is to keep your bike in the living room, up on paddock stands next to the telly. And if you have to move one part of the three piece suite into the garage (or just dump it on the front garden like they do on them council estates), then so be it, the kids will just have to sit on the floor. Your house, your rules.

If you happen to be the proud owner of the aforementioned thermostatically controlled workshop, fine. You have my permission to, once again, disregard this element of our argument. But, if like most, you’re not, pay attention. Because it’s not only your tyres that you need to worry about when the temperatures drop below zero. Once Jack Frost gets his vice-like grip on your bikes coolant, there really is no telling what’ll happen. If we’re talking about a race bike, bereft of anti-freeze, there’s a real danger of your bike’s coolant freezing solid. Possibly with some seriously costly consequences, as the expanding water-ice rips holes in any bits of crank-case in its path.

Of course, if it’s a road bike, it’s likely to have anti-freeze in it, so you’ll probably be fine. That said, with climate change experts promising warmer summers and cooler winters, can you really be sure that your anti-freeze is up to the task of protecting your pride and joy? If Gretta Thornberry and the ‘Give Global Warming a Chance’ brigade have taught me anything, it’s to expect the unexpected. They don’t stop banging on about the plummeting winter temperatures on the horizon, so I suppose we’ve all been warned. You’ll only have yourself to blame if your coolant freezes and it tears your engine a new ring-piece. Don’t take the chance. Keep your bike in the living room.

It doesn’t matter how much you spend on locks, chains, ground anchors and alarms. There’s always some utter scrotum that wants to nick your bike, and it’s a sitting duck in your garden shed. Sure, you could always rig up some Home Alone style thief traps to inflict as much pain as you’re legally allowed to, to any unwanted intruders on your property. Unfortunately though, I’m told that it’s a frustratingly small amount (of pain, that is). And besides, if you are anything like me, you’ll end up with the iron swinging down and hitting yourself in the face, rather than the scumbag that’s trying to break in to your shed. “DING”. No, the much more sensible option is to remove the temptation altogether. Keep your bike in the living room where you can see it.

There’s still every chance that, in the dead of night when you’re are sound asleep, robbers will try their luck. But they’ll soon realise how difficult it is to get out of the front door without waking anyone up. Chances are, they’ll either call it a night or go and pray on some other poor sod. Someone who hasn’t had the presence of mind to move his bike into the house, no matter how much of a ball-ache it might be.

A motorcycle isn’t like a car. Getting the best from your bike takes a lot of care and attention. And what better place to give it that care and attention, than from the comfort of your own home. All the little jobs like checking the tyre pressures, changing the oil and filter, lubing the chain and winding the odometer back have historically taken place in the garage or on the driveway, but why should it? You’ve got a perfectly good living room, remember. Just think of the time you’ll save popping into the house to put the kettle on… you’ll already be there!

It’s unlikely that your family will have spent a lot of time helping you maintain your bike up to now. The last place they want to be is in a cold, cob-web ridden garage. But now it’s in the house, there’s really no reason why working on the bike shouldn’t be a family affair. Imagine the hours of fun you’ll have watching the kids polish the bits that only tiny fingers can reach. Or watching the wife trying to whip a sump-plug out without splashing used engine oil all over the cream carpet. Forget the festive jigsaw this Christmas, if you want to build tighter relationships within your family unit, why not keep your bike in the living room?

Are you unlucky enough to have a television in your house? If so, you’ll know that despite there being literally hundreds of channels to choose from, there’s rarely anything worth watching. Occasionally you’ll find a bit of bike racing. Sometimes there’s the odd program that’s worth half an hour of your time. But for the most part, if they aren’t trying to sell you tampons, they’re boring you to tears with re-runs of Top-Gear. Or a sofa full of menopausal woman talking bollocks. Or z-list ‘celebrities’ eating kangaroo cocks in a jungle. It’s absolute garbage.

No, I’d sooner sack the telly off altogether and stare lovingly at my bike, whilst I’m sat on my couch. You could even invite friends round to come and sit with you and look at it too. Maybe let them sit on the bike for a spell. It might not be the most engaging way to spend an evening, but it’s a sight better than a night staring at the idiot box. So do yourself a favour; fold your mirrors in, squeeze your bike through the front door and park the bugger right in front of your telly. It’s time to keep your bike in the living room. You won’t regret it.

This is the dream… On a spotlit, rotating platform!

I’m all for a bit of moto-sculpture in the house & would have a Honda RS250 on a well lit rotating turntable in my house if I could get away with it – in conjunction with two stroke themed air fresheners.

Got to give the girlfriend something to complain about. 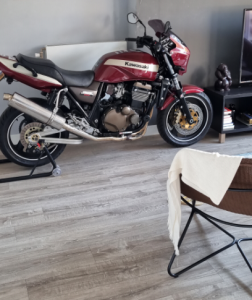 I’d only just read out the title and it was no bloody way….my missus just doesn’t understand

This is hilarious. I’m laughing and crying a bit. There’s a compressor, generator and tool kit in our house. Would love to know the benefits of keeping these in house 😜

Another point missing off this list, working on the bike! There’s something to be said about adjusting the tappets sat on a stool in the kitchen with the heating set just right.

Lounge room all the way!! 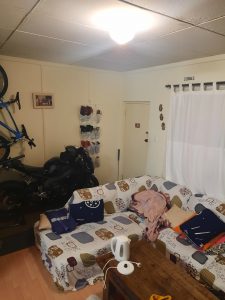 Sharing this about. Soon I’ll be having dinner with my fireblade.