News62 Norton5 Norton V4 SS V4 RR2
You can’t accuse the TVS Motor Company of going about things half cocked, as far as their acquisition of The Norton Motorcycle Co Ltd... 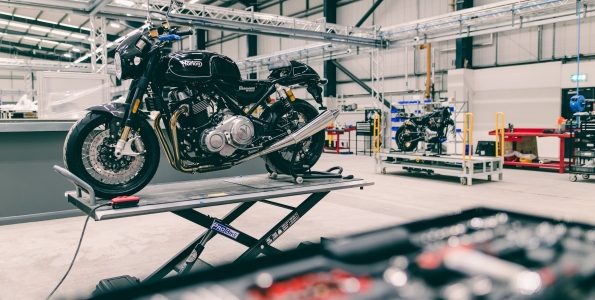 You can’t accuse the TVS Motor Company of going about things half cocked, as far as their acquisition of The Norton Motorcycle Co Ltd goes. After buying the 122-year-old bike brand for £16 million last April, it’s just been announced that TVS are about to open a new Norton factory in Solihull, in the West Midlands.

The new Norton factory will be home to a skilled team of production engineers, and whilst some tooling and equipment has been carried over from the old site at Castle Donington, there has been substantial new investment. This will be ‘the most advanced manufacturing facility Norton has ever had’ according to their PR people… but that’s not really saying much, is it.

When the new site opens, some time in Q1 2021, production will resume on the Commando Classic to fulfil any outstanding orders. And we’ve heard there are quite a few. They say that V4SS production will commence soon after that, although how soon is anyone’s guess.

The new Solihull site isn’t just a factory, either. It will be Norton’s main headquarters and the permanent base for all its staff; sales, marketing, design, admin, you name it. The investment from TVS, India’s third largest motorcycle manufacturer, has already created over 50 jobs in the West Midlands area, and that number is expected to rise as the business grows.

Sudarshan Venu hit the nail on the head when he said “The opening of the new headquarters represents a significant step forward for Norton Motorcycles,” because let’s face it, it was a shower of shit at the last place, with Stuart Garner in charge.

Nobody really knew what was going to happen when TVS took Norton over 9 months ago, especially with COVID-19 throwing a spanner in the works. But, with continued investment in the new Norton Factory, it seems as though the Indians are genuinely committed to dragging the British bike manufacturer out of the gutter. Nice one, TVS, keep up the good work.

A bit Harsh on Stuart Garner. Coming from a manufacturing, production engineering/control and design background I can sympathise with the problems he had.My thoughts his background and management team from the wrong background did not understand the major requirements to design and develop a range of vehicles for volume production and got carried away with the development of to many models. The ultimate disaster was inevitable along with the poor decisions that were made in an attempt to save the company. He does have to be credited though with taking Norton to a position that would make it attractive to a large experienced manufacturer. The V4 is a thing of beauty, you can’t criticise him for that piece of Art and engineering or where he got Norton to before it all collapsed.

Fingers crossed they succeed. Can’t believe the attitude of the last owner and the things the company was getting away with! Mr Garner should be in prison!

Another mask wearing victim helping to promote the scamdemic.

Can you guys get your hands on one of their dominators? They look like they would be a good bike, let’s hope they keep their £10k price tag.

Nice bike, can I have one ?