MV Agusta12 review50
Weeks after announcing a commercial partnership with Mercedes AMG, we got to sample MV Agusta’s latest addition to its ever-expanding range: the Stradale 800.... 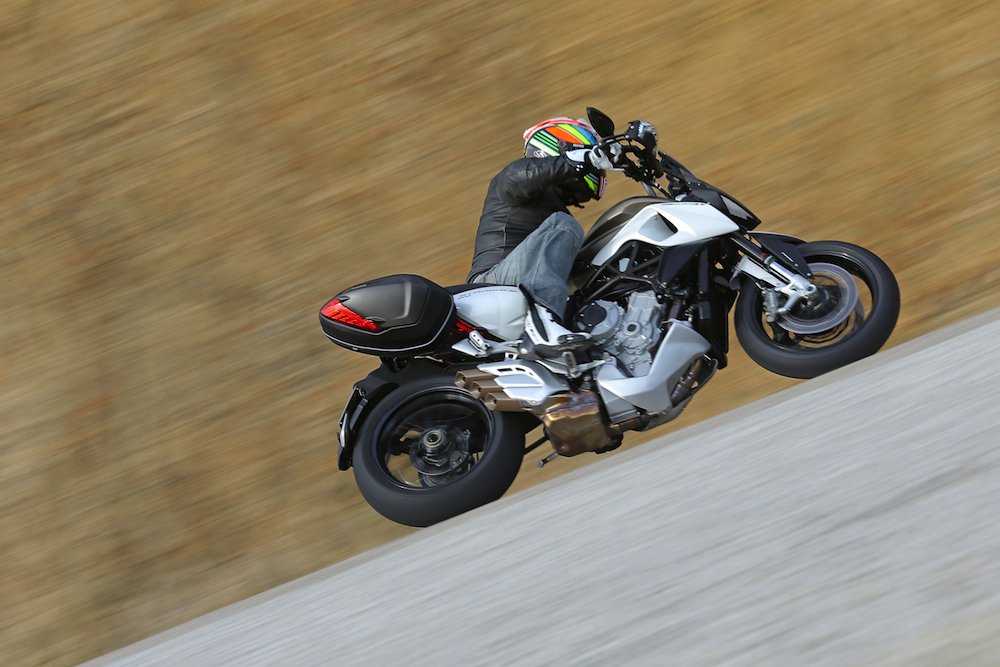 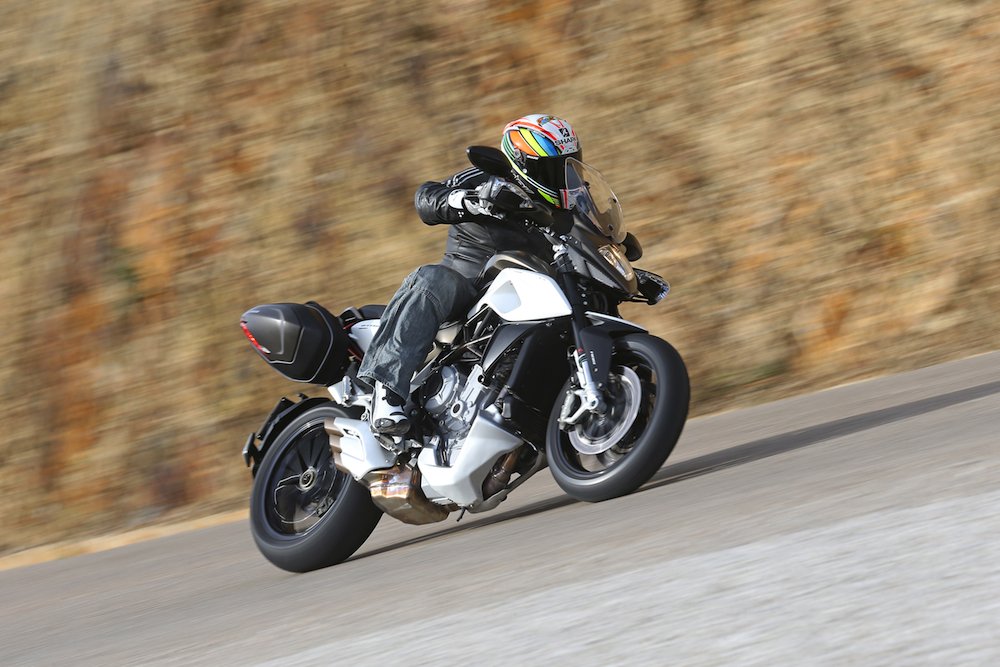 Weeks after announcing a commercial partnership with Mercedes AMG, we got to sample MV Agusta’s latest addition to its ever-expanding range: the Stradale 800.

You might be looking at the Stradale and thinking it’s a sports-tourer, and you’d be forgiven for such naivety. But this isn’t just any old sports-tourer – this is MV Agusta’s interpretation of a ‘light-tourer’, which should loosely translate to frenzied adventures and wheelies. When was the last time you saw an auto-blipper on a mile-munching tourer of any sort?

Based on the mental Rivale motard thingamabob, the Stradale features significant alterations to ensure a slightly more touring-based outlook on life. But don’t be fooled by the panniers and screen: it’s an MV Agusta after all.

Launched in the legendary foothills of Ronda in Spain, the initial road surface was that shiny Tarmac that looks so welcoming but, in fact, is horrendously slippery – the Spanish equivalent of a bowling alley.

We needn’t have feared though, as the Stradale exudes supreme feedback through the ‘bars and its simplistic requirements are soon evident. The inherent stiffness of the trellis frame mated to plush suspension is an enchanting mix, offering astuteness and also masses of confidence. Whatever the speed or rider commitment, the Stradale keeps churning out the minerals. 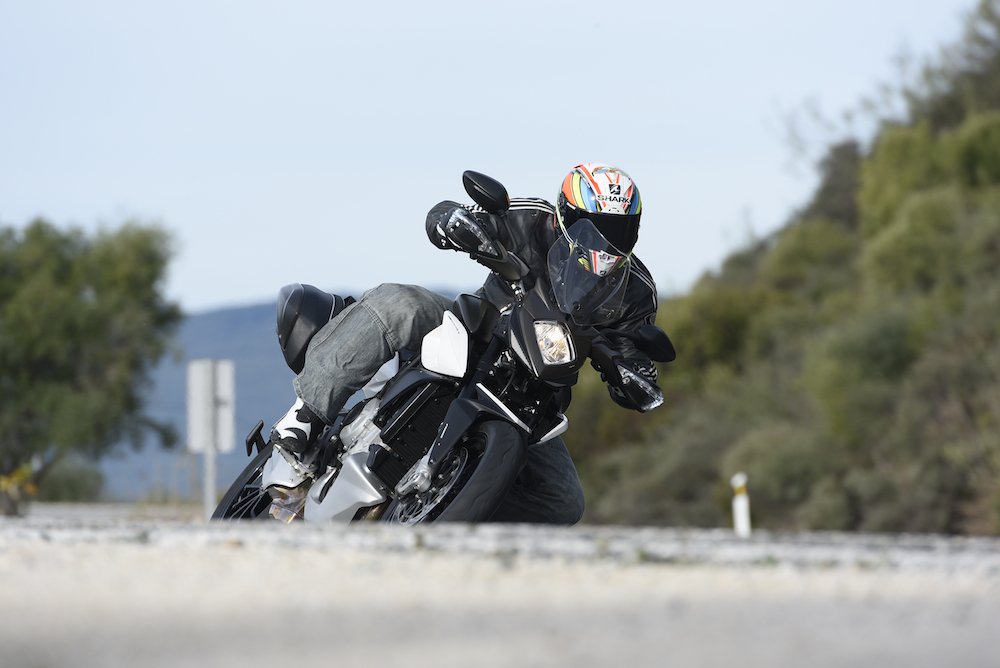 Getting on the thing is a task. At 870mm, the vertically challenged should look elsewhere, and height isn’t the only complaint with the seat. Ergonomics are generally comforting, with the ‘bars falling nicely to your torso and a relaxed lower body. Like many naked MVs, you’re hugged over the front wheel giving a sense of control. And with the Stradale, there’s a new dash to ogle at for extra pleasure.

The problem lies with the restricted movement: there’s genuinely no room for any manoeuvring, and it’s one of the strangest seating arrangements I’ve ever sampled. You’re stuck in one position, which makes long distances induce sore botty syndrome. MV’s answer to the awkwardness is a flatter aftermarket saddle or pinching the Rivale’s that bolts straight on.

Pretty much any touring-related bike is a heifer (in relation to the Stradale) and makes no attempt to hide the mass, not to mention tendencies to bar flapping when you approach triple figure speeds. Being so tall and slender, and uniquely equipped, we can’t compare it to a naked sportsbike, but its sporting talent will see off any touring rival.

The first pleasant surprise was its bump compliance and just how well it sucked up shitty surfaces. Marzocchi forks and a Sachs shock get extra travel over its motard brethren and uses the weight transfer as an advantage. This was probably the first MV Agusta I’ve ridden with a set-up that feels bang-on from the off – the whole of the stroke feels exquisite. 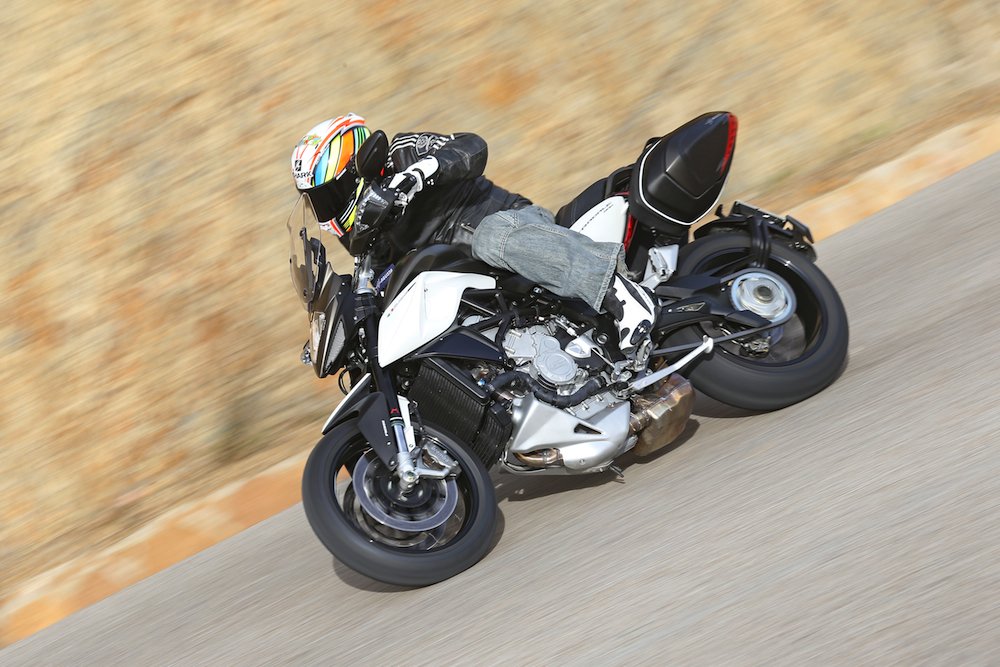 Being much longer than the Rivale (46mm longer wheelbase: longer swingarm and extended headstock) brings a mass of stability and road holding. There’s also a more relaxed geometry setting. As hard as I tried, I couldn’t get ‘Dale out of line.

Previous MVs have been lampooned for their shoddy ride-by-wire execution but the Stradale, like the whole fleet of fresh MV Agustas, is beautifully refined. There’s still that trademark arcade throttle action and, in conjunction with the free-revving 800cc triple motor, guarantees constant thrills and unique manners.

According to MV, the motor is 90% Rivale but features a hydraulic clutch. With a claimed 115bhp and retuned for midrange over the F3 series, the Stradale never feels insanely fast and still takes some abuse – and fussy gear selection – to get the motor busy at low revs.

If you’ve ridden a Triumph, sampled the UK’s take on triple-cylinder action, and assumed all three-pots are the same, think again. With a counter-rotating crank and very little internal inertia, any MV carries a lot more edge and aggression than a Triumph.

What’s quite very annoying is the front wheel’s reluctance to hoist. It’s as though MV has installed a hidden device, for premeditated anti-wheelie control.

Talking of devices, the auto-blipper (and quickshifter) goads pointless shifting and hours of fun. And being a new generation MV, there’s a banquet of electronic aids and mass adjustability at your disposal. Having four riding modes is all fine and dandy, but the ‘User’ option allows total customisation of throttle response/sensitivity, engine braking control, and engine character on top of the de rigueur traction control, et al – very much like the BMW S1K.

Apparently, every single (new) MV owner in the UK is all over 40, and a slightly more sensible MV in the range isn’t going to remedy this factoid. To summarise, the Stradale is an MV for your dad, or an MV if you’ve got back problems but it still surprised me with its general aptitude.

£11,599 can be construed as a hefty price tag, although you’re getting a huge amount of bike for buck with the Stradale. Having half-decent wind protection and a 16-litre tank makes it a genuine tourer, but it’ll also hang with a vast array of sportsbikes until you require too much lean angle. All in all, hugely impressive. 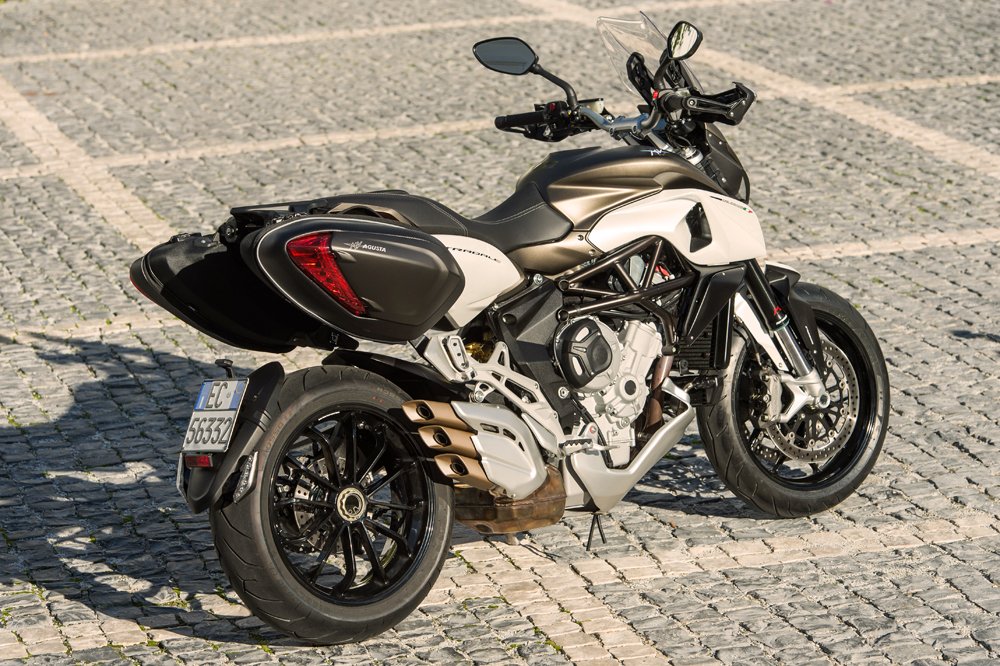 – A hydraulic clutch is used for the first time in the 800 series, which means the engine is 20mm narrower. Power is set more for the low-to-mid and the rev-limit has been dropped to 12,000rpm, and there’s a new, quieter (and bigger) silencer.

– There are four riding modes: Sport, Normal, Rain and Custom. Sport gives you the full 115bhp, while Normal and Rain limit power to 90bhp. There’s a quickshifter, an auto-blipper on downshifts, traction control and ABS. Custom mode gives you the option of total preference – throttle sensitivity, engine response, rev limiter cut-in, engine braking and engine response can all be suited to the rider.

– Being slightly tourer-based, there’s now a fuel gauge on the all-new dash, rather than just a light. The screen can be adjusted 50mm up or down, and tilted by 5 degrees.

– The Stradale comes with the two 14 litre panniers, which feature tasty integrated rear lights. There’s also a 34-litre top-box option for all you mile-munching heroes. 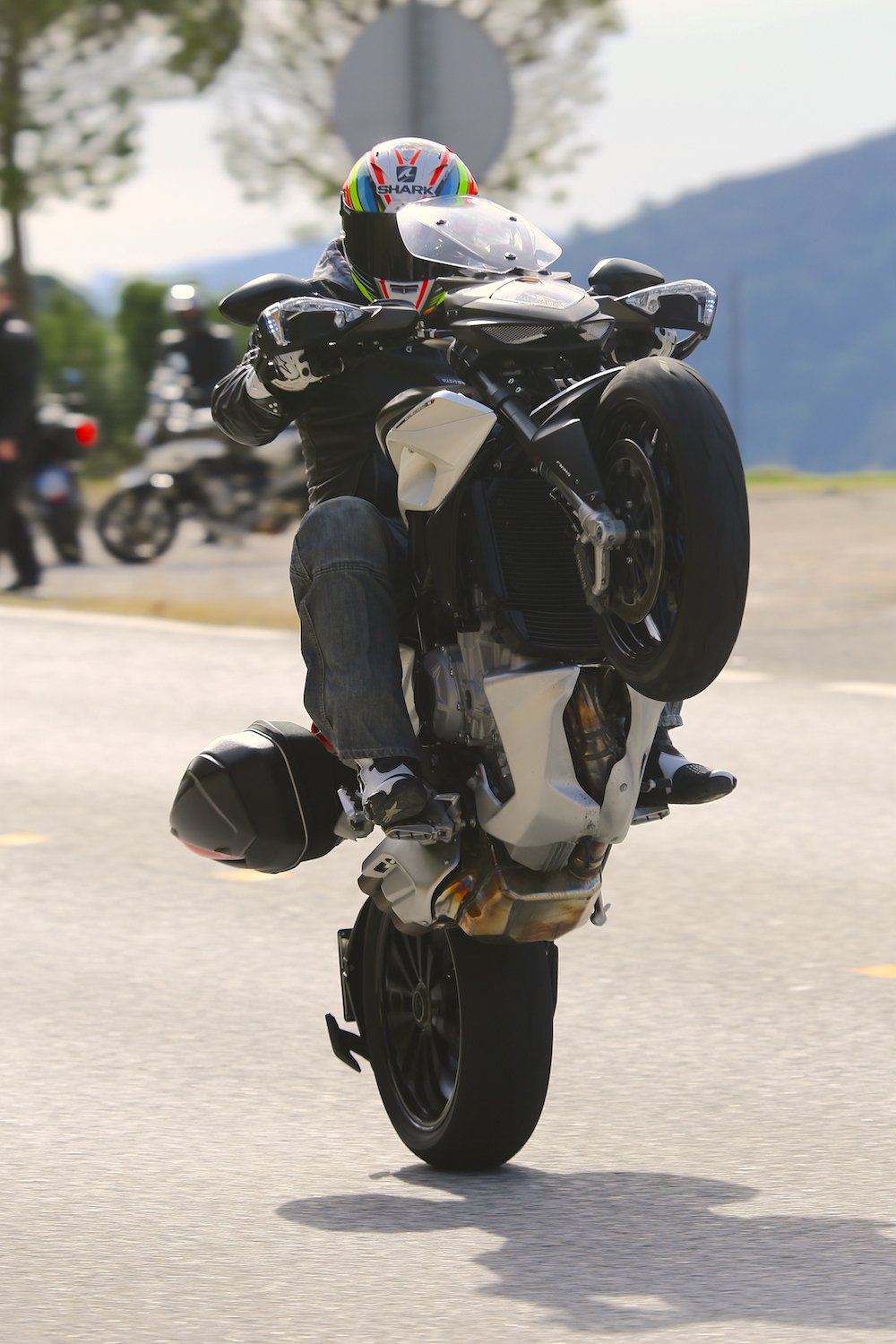