Classic Bikes9 Modern Classics3 Retro5
Can you remember Steve McQueen and his mate bombing around Germany, evading the Nazis on retro-as-you-like motorbikes? Do you remember old BSAs and AJSs...

Can you remember Steve McQueen and his mate bombing around Germany, evading the Nazis on retro-as-you-like motorbikes? Do you remember old BSAs and AJSs with a nostalgic smile? I don’t. I’m too young. And I can remember many a conversation with my dad, and my old grandad, about the bikes they used to race when they were young men. They’d glow with pride as they’d show me pictures of their (then modern but now classics) race bikes from yesteryear; much to my disapproval. “You mean you raced that?” I would scoff, unimpressed. “Why didn’t you race a proper bike?” Little did I know that back in the day, particularly my grandad’s day, the relics in his black and white, dog-eared photos were considered pretty cutting edge. They were proper bikes.

But now we’re living in the 21st century, there’s a growing fraternity of people that would argue it’s not a proper bike unless it’s got double overhead cams, upside down forks and umpteen levels of traction control. That used to be me. Growing up, I was never one for classic bikes of any description. I was only ever interested in the latest and greatest.

That was until I took my uncles old RD 400 for a spin. That’s when I decided I actually quite like the idea of riding classic bikes. Since then, I’ve ridden a few, and whilst most of them have been fairly rubbish, I’ve still enjoyed riding them. I thought to enjoy riding classic bikes, you had to have been around when they were new; I thought that was how nostalgia worked. But I’ve since learnt that that’s not so. I think you can have nostalgia by proxy. All you need is a little bit of imagination, and you’ve gone back in time. It’s incredible, really.

But as much as I enjoyed riding them, I wouldn’t have enjoyed owning one, because they break down. A lot. Which is why all of a sudden, a modern classic seems like a viable option. All you need is a modicum of extra imagination to transport your soul back in time.

I’ll be honest, when all the manufacturers started going full-pelt with modern classics, I said it would never catch on. I thought it was just to give the hipsters something other than cask ale, beard wax and ill-fitting trousers to spend their money on. But it can’t be. Because most of the major manufacturers are still building, and more importantly selling, a sensible amount of them bikes today. They can’t have sold them all to hipsters, can they?

And if you don’t think it’s really ‘you’ then you should give one a go. Pulling off at traffic lights and junctions astride a bench seat, in your wax jacket and jeans will make you feel almost like a proper gentleman. Or gentlelady. I know I’m not one to talk about style (you should see my wardrobe), but there’s definitely something about modern classics that’s a little more dignified than a fire snorting superbike.

I know I’ll never be part of the hip and trendy cool gang. But now I’m a bit older and ever so slightly wiser I understand what this type of bike is all about. Riding a modern classic is like going back in time, but with the rosiest of rose tinted spectacles. Look at it this way: if you buy a classic bike, it’s not going to be this good. It might look similar, but it won’t be as fast and it won’t handle as well. And by golly it won’t be as reliable. I can see why people get hard about the nostalgia associated with riding a ‘classic’ bike. But if you ask me, you’d be much better riding ‘modern classics’ than actual classic bikes. Because classic bikes are, well, usually a bit crap.

Crap? Well, I would say classics are different, of their time, but as you said, some weere cutting edg eat the time. For example a BSA Gold Star could perhaps be considered as the Fireblade of it’s day, and a well set up Norton Commando is arguably the best British twin ever made, but of course it was quite late in the day and too late really, then it became too long in the tooth. There were some naff machines mind that liked to go pop, but the high maintenance in time, but generally not money, was of a different time, but, with just a few spanners and a Brummie screwdriver, most folk could do themselves. That’s not the way much these days. Take classics for what they are and enjoy them for what they are. Modern retro’s, at least some of them, are a bit dull. Yes they work, yes they don’t require much more than petrol and a squirt of chain lube, but take the new RE Interceptor. Excellent bike that doesn’t cost the earth with a lovely engine and decent build quality with no oil leaks, braks that work and an electric start, all for around the third of the price of an original Interceptor, but to me it’s sort of too good and lacking a little something. Or perthaps I need something to moan about (wink). How about a commuter 2-stroke that stemmed from Germany in the 1930’s that became one of several bikes used by the armed forces in WWII and helped to stick it up the pratt with the silly moustache from Austria. Then it was the RE Flying Flea, post war the RE125. 5bhp, three speed handchange gearbox, no rear suspension apart from a sprung seat and your backside, and a front brake that was pointless fitting. 100 mpg mind and I shall hope to enjoy riding it from England to Arnhem in the Netherlands in September 2022, all being well. Note the word “riding”, for it will be somewhat of a challenge, hopefully an interesting and fun one. Crap? No, I don’t think so. An interesting experience? Yep, we’ll go for the latter. Be open minded ab=nd don’t expect them to be as bikes are now. 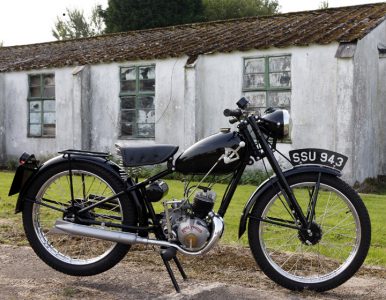