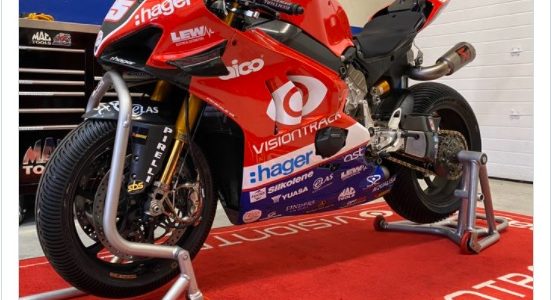 Michael Dunlop, 19-times TT winner, will be riding a Ducati Panigale V4 R for Paul Bird Motorsport at this year’s NW200 and Isle of Man TT.

It ought not to come as a massive surprise to anyone that Michael Dunlop has announced he’ll be racing the PBM Ducati at the 2022 NW200 and Isle of Man TT. The deal was made over two years ago, for the Ulsterman to ride ‘Birdy’s’ Ducatis in 2020, but that never happened for obvious reasons. So it appears Dunlop and Birdy are piking up where they left off, albeit on a newer, sexier steed, the Panigale V4 R.

It is a brave move taking a Panigale to the Isle of Man TT, but it’s a bold one as well. It’s a while since anyone has had any real success with one there. Michael Rutter tried in 2011, on a Ducati 1098R, and managed a couple of top tens, but nothing to write home about.

Before that, you’re probably looking at 2003, when John McGuiness rode Birdy’s Monster Mob Ducati. To be fair he did get a couple of podiums (second in the Formula 1 TT and third in the Senior TT).

Anyway, my point is that Ducati don’t have much of a record in recent TT history. Perhaps that’s all set to change.

I haven’t ridden the latest Panigale V4 R, but I have ridden the V4 S, and it is a seriously, seriously impressive bike. And we know the the R is like the S, but more suited to super-fast racing. So that makes it perfect for a TT, doesn’t it?

Well I don’t think it’s as simple as that. Going racing on any new bike is always a risk; you don’t know what’s going to work, what’s going to break. T0here are ALWAYS issues when you go racing with a new bike. And you can multiply that by ten when you’re racing round the 37.7 mile TT course. Things happen to bikes at the TT that would never happen anywhere else. The stresses and strains on the engine, frame and all of the bike’s extremities are like nothing else in the world when you’re putting hot laps in, on one of the fastest, bumpiest most unforgiving circuits in the world. And you can bet your bottom dollar that Michael Dunlop will be putting hop laps in on the V4 R.

This isn’t me passing comment on the reliability of a Ducati. What I’m saying is that all the other teams, on other bikes, have got more experience with them. They’ve got a better idea of what works, what doesn’t, what needs reinforcing, how hard they can push their engines, how far they can rev them, and for how long.

And that’s before you consider the fact that the Panigale V4 R is already a fairly highly strung motorcycle. Yes it’s fast, but it’s completely untested (on the TT course), and that’s why I think taking a Panigale to the TT is a bit of a gamble.

That said, if Dunlop is to win another TT any time soon, I think he probably needs to take a bit of a gamble. Peter Hickman and Dean Harrison really stepped things up in 2018 and 2019, so he’ll have his work cut out, if he wants to beat them. Even if he is on a faster bike.

And if it isn’t working out, he can always jump ship half way through practice week, like he did in 2015, when he couldn’t get the Milwaukee Yamaha R1 to work. Conveniently, Buildbase BMW had a bike built and on it’s way to him on the Isle of Man, almost as soon as he’d made the decision to leave Yamaha back in ‘15.

And this time, he’ll only actually be riding the Ducati in the Superbike and Senior TT, so if it really isn’t happening on the Panigale, he’ll have his own Superstock bike to throw a set of slicks on and ride in either of the ‘big’ races.

I think it’s great to see Ducati back at the Isle of Man TT, and it’s particularly good to see a top rider on one. I don’t know how much factory involvement there is, but with Paul Bird Motorsport at the helm, you’d have to assume there’s some sort of official support.

Michael Dunlop, riding a Ducati Panigale V4 R, will be one of the fastest things round the Isle of Man TT course. I’ve no  doubt about that. But will the TT course prove too much for a bike that’s essentially been designed for superbike racing. Only time will tell.