Fireblade4 honda38 Racing220 World Superbikes20 WSBK18
Either HRC’s (Honda Racing Corporation) new Fireblade is better than it’s ever been, or they’ve got some really special riders in the shape of... 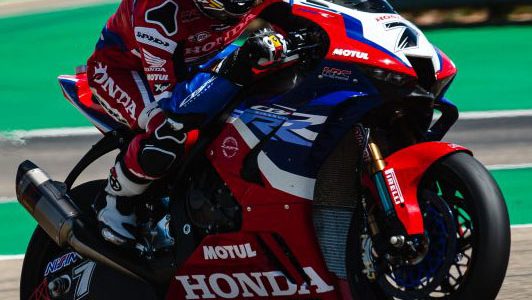 Either HRC’s (Honda Racing Corporation) new Fireblade is better than it’s ever been, or they’ve got some really special riders in the shape of Iker Lecuona and Xavi Vierge. Or both. Because never have Team HRC started a WSBK season so well. And that’s with a pair of riders who are not only new to Team HRC, but are new to WSBK, new to the Fireblade, and new to ‘production bike’ racing in general. And they’re lying fifth and sixth in the WSBK World Championship standings.

The last time Honda had any real success in WSBK was (arguably) back in 2016 when Michael van der Mark and the late, great Nicky Hayden were both Fireblade mounted. That year, Van der mark started the season with a couple of impressive podiums and he and Hayden ended the season fourth and fifth respectively. They might have been on Hondas, but they weren’t racing for Team HRC; the only Hondas on the grid at that time were fielded by Ten Kate Racing.

No, Honda Racing Corporation have only run their own official racing team in WSBK since 2019, and it’s fair to say they’ve struggled. The best result they’ve had was a couple of years ago in 2020 when Alvaro Bautista managed to get himself into ninth position by the end of the championship. That was after coming second to Jonathan Rea in 2019, on a Ducati. Bautista’s back on a Ducati now, and back at the top of the championship standings.

So when HRC announced they were putting a couple of WSBK rookies on their Fireblades for 2022, there were a few Honda fans that were slightly concerned. If the likes of Bradl, Camier, Bautista and Haslam can’t make it happen on a ‘Blade, what chance have WSBK newbies, Lecuona and Vierge, got? I hasten to add, I wasn’t one of them. As it happens, I had quite a bit of confidence in Honda’s new boys… although I hate to say I told you so.

Whilst seventh, ninth and eighth (for Xavi Vierge) and sixth, eighth and tenth (for Iker Lecuona) probably isn’t concerning the likes of Rea and Razgatlıoğlu just yet, I think it’s something that maybe ought to. Because HRC have obviously got a WSBK bike that’s capable of doing more than it has been capable of doing in the past; like consistent top-tens in the first round, for starters. But they’ve also got a couple of riders that are only going to get stronger. And they’re already pretty strong. Aragon was their first race weekend with a new team, in a new paddock and on a new bike, which are all things that take time to adapt to. And that’s not to mention the fact that Vierge was nursing a two-week-old broken rib.

It could take half a season before they’re comfortable enough on the Honda to know how to get the best out of it. And it’ll take the technical guys at HRC time to understand how best to set the bikes up for their new riders. There is so much for the riders and the team to learn, and if they are this competitive, this soon, I’m convinced they are going to be a real problem for the rest of the grid.

One thing they do have on their side is the fact that both Vierge and Lecuona are of a similar pace, and have got a GP background. That means their riding styles are likely to be similar, so their preferred set-up ought to be similar, too. If you’ve got two riders wanting the same updates for the bike, you’d assume HRC and the Honda factory would be more inclined to deliver, than if you had two riders wanting to push development in two different directions. It also means their data will be similar, so they can help each other, and each other’s technical people. That might not be something that they’ll always want to do if they’re in stiff competition with each other, but it’s probably for the greater good.

HRC new lads had this to say about their first weekend as WSBK riders.

“Before coming here, I did not even expect to finish all three races but, in the end, not only did we finish them but we also consistently fought in the top ten. I’m really happy to have finally discovered the WSBK championship; it’s a nice racing format and I’ve really enjoyed it. Due to my recent injury, I had to build on my performance over the course of the weekend.

Step by step, I was able to increase my pace over the weekend and I can say I’m very happy with the work we did each day. Hopefully now, in the run up to Assen, I can recover and be fully fit for the next round so that I can focus solely on the track action. Iker and I are pushing to the max and this is good for us both, but also for the team as a whole. We get along well, and I think we are all doing a good job as a team.”

“Overall, I think I can be happy. Leaving Aragon in fifth place in the championship, considering this is my first round with the team and the bike and after crashing in testing, is not bad at all. Having said that, it’s frustrating that I missed out on the chance to do better than eighth in the sprint race after making a small mistake when I shifted into third gear in a second-gear corner, losing some ground that I wasn’t able to recover.

In Race 2 I struggled a lot, firstly when I found myself behind Xavi; it took me some time to pass him because I really wanted to do it in the safest possible way. I eventually moved up to eighth but then I started to lose the front in the final stages of the race. I had to be careful not to crash and so couldn’t defend my position in the end. A bit of a tough race then, but it’s all experience that we will harness in order to do better in the future. Thanks to the team because they always work very hard and really help me.”

As expected, at the very sharp end, 2021 Champ Toprak Razgatlıoğlu was joined by Jonathan Rea and Alvaro Bautista. Actually he was beaten by them. The next round is at Assen in a fortnights time, where I expect Bautista, Rea and Razgatlıoğlu to be at the sharp end again. But I also expect Honda’s Lecuona and Vierge to be even closer to them than they were at Aragon.

These are the championship standings, so far…