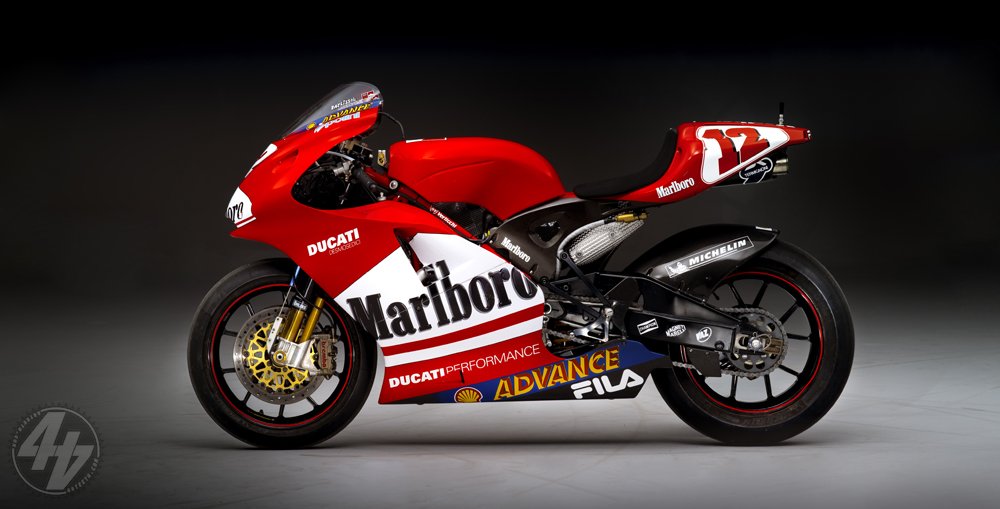 Ducati’s Desmosedici D16RR was the first glimpse of road-legal MotoGP replicas under the four-stoke era. While the super-exclusive Desmo polarised sportsbikes fanatics (some couldn’t quite grasp Ducati’s rightful insistence on downgrading and detuning for obvious longevity and financial motives), you can’t dispute its true Grand Prix DNA and sexy V4 soundtrack. Even so, there’s nothing quite like the real thing. 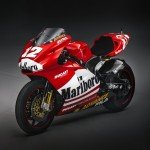 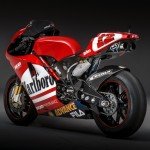 “It came from Bologna via Target Motorsport, who buy an awful lot of Ducatis directly from the factory,” says Patrick. “It did the last three races of 2003 in its current guise – with the same engine and frame – although as you’ll appreciate, most of these things are Trigger’s brooms. It was rebuilt to go winter testing and then not used until it got to Target, in a ready-to-race condition. It is pretty immaculate.”

“The architecture of the engine block is reasonably simplistic, and it’s obviously got a trellis frame. The swingarm is very nicely fabricated but it’s not light years ahead of its time. The nice thing about the GP3, because it’s the first of its kind, it’s a really nice homogenous design so everything is where it’s intended to be. As the series of these bikes went on before they went to the 800s, you can see that things have been hacked around and lobbed on the side. The GP3 really is a very pure bit of design.”

As with the #34 RGV, Patrick likes to keep the GP3’s wheels turning, Desmo valve gear running and not gathering dust in true collectors’ form. It’s an absolute joy to behold: to study, to meticulously inspect hidden trinkets and factory prototyping, and looks just as tasty with its clothes off.

“I took it to a trackday at Donington Park and couldn’t get my head around how much heat it kicks out. It was unbearable. People had said they run really hot and I’d heard stories about the ‘bars getting hot, and it’s all real. There are little cooling vents in the fairing to cool your hands, and the 12-minute session I did was about as much as I could stand. I really thought I was going to be on fire! How the hell they do 45 minutes around Sepang is astonishing.

“You pick it up at the beginning of a straight, look ahead, and decide how many people you’re going to pass. And the noise at 17,000rpm is just unreal. But these things are bits of history to me and the last thing I want to do I bin one. Being an original bike, it’s as much about destroying this history as it is about the cost of putting it right again” 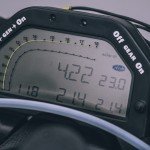 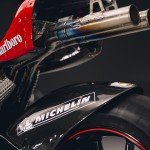 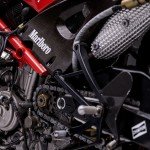 While Valentino Rossi and fellow Honda pilots enjoyed V5 power and luxuries such as traction control in 2003, the Ducati was rather more unsophisticated, despite the apparent maze of leads and connectors that occupy the cockpit. How the bloody hell are you expected to race 230bhp without any electronic assistance? More than likely unfeasibly large testicles and talent to match. It’s only 12 years ago, yet being a factory racer, I still had visions of pre-warming engine oil or other pre-ride rigmaroles.

“You don’t need a laptop to start it or anything like that. Everything you need to see is on the dash. There’s no traction control, there’s no anti-wheelie: it’s quite simple really. It’s got a semi ride-by-wire throttle but that’s a straightforward system. It’s definitely not antiquated but it’s also certainly not full of toys, and when they introduced those sorts of things on the GP4, that’s when they got into trouble, I’m told. Aside from the semi R-b-W and quickshifter, that’s about as complicated as it gets.

“But starting it is quite a palaver. It’s got a slipper clutch that needs locking up before attempting to fire it. There’s a little door in the side of the fairing, so you insert a pin into the clutch, put it in third, spin it up with the donkey and remove the pin. Which is fine in a controlled environment but not ideal at places like Goodwood, where you cannot sit on the line for any length of time without it cooking itself.” 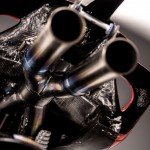 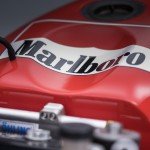 Before MotoGP incursions, Ducati was all about the L-twin engine configuration but realised outright power would be an issue. Despite big horsepower, the GP3’s V4 Desmosedici motor is evidently quite affable. You’d imagine those things to be really vicious, wouldn’t you?

“The GP3 is the ‘screamer’ and a few years later Ducati moved to the twin-pulse engine. The power delivery on the ‘3 is really linear, and probably the nicest four-stroke engine I’ve ever come across. It’s very predictable and doesn’t do anything nasty, almost like riding an extension of your body: it just does everything you want it to.

“They are very physical to ride. You’ve got to climb all over them to get them to turn. I have got carbon brakes for it but we run it on steel discs, but even then it’s just mind-blowing how quickly it stops.”

Über thanks goes to: Patrick for sharing his thoughts, and pride and joy. And to James Ward for the stunning photos. We’re currently brainstorming ways and means of how to raise funds for such a steed, Sponsors welcome. 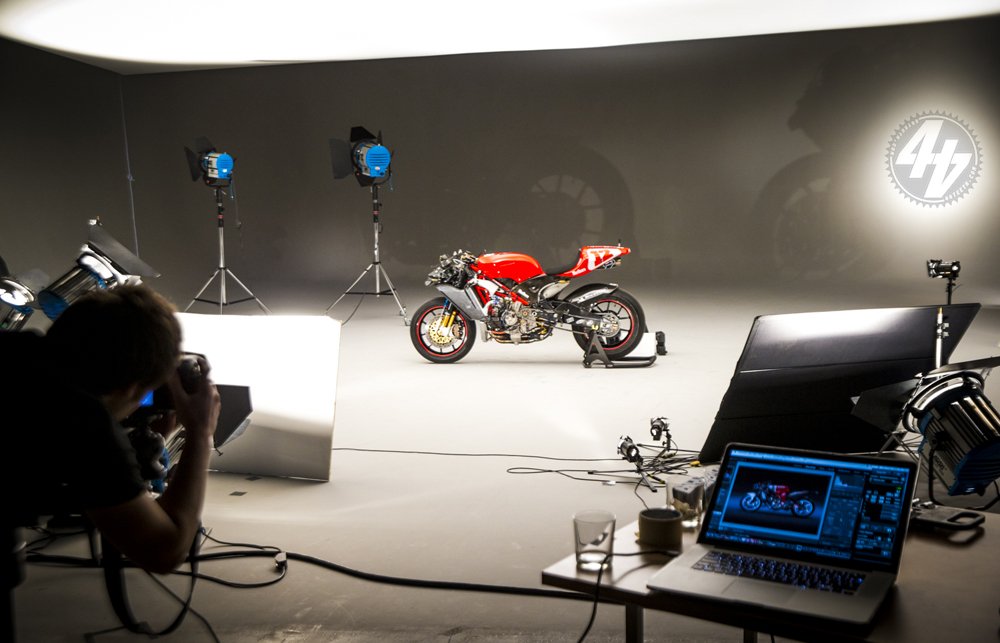