I think you’ll all agree that this thing looks pretty gosh darn saucy. The 2021 Ducati Panigale V4 SP is the newest addition to the Panigale V4 family, and it’s a very welcome one indeed. It’s been a long time since we’ve seen the SP (Sport Production) initials on a Ducati sportsbike, too long really, but Ducati haven’t completely forgotten what it means. It means slapping a slack handful of mega trick parts at an already fairly trick bike, and charging you through the nose for the privilege. That said, if I had £32,295 burning a hole in my bank account, I think I’d be getting in the queue for one of these bastards.

What’s so SPecial about it? Well, when the ‘blank canvas’ is a Panigale V4 S, they’d have to try really hard to fuck it up. If the numbered billet steering head and dedicated ‘Winter Test’ livery isn’t enough to give you a woody, then the smattering of Superleggera parts ought to be.

The V4 SP has got the same five spoke carbon fibre wheels and Brembo Stylema R front brake calipers as the £86k Superleggera, with Brembo’s MSC adjustable master cylinder and remote adjuster. The carbon wheels are 1.4kg lighter than the forged ally units on the V4 S, and the Brembo getup at the front end promises to provide strong, sharp braking for long (I don’t know how long they mean by ‘long’) timed track session without any fade.

The SP is powered by the same 1,103cc Desmosedici Stradale engine as the V4 and V4 S and makes the same 214hp (@12+3,000rpm) and 124Nm of torque (@9,500rpm), but it puts all that through a STM EVO-SBK dry clutch. They say the dry clutch guarantees much more effective ‘anti hop’ control even in the most aggressive downshifts, making it even more suited to the track. And then, of course, there is the dry clutch rattle that, love it or hate it, is ‘oh so Ducati’.

In fact, there’s a very ‘track-focused’ feeling to all the upgrades they’ve treated the SP to, not least of all the 520 pitch chain and the adjustable billet rear-sets. You even get a Ducati Data Analyser (DDA+), so you can go through all your data in the pub, after your trackday, and see why you weren’t on lap record pace! On paper, it really does seem like the kind of thing that would be much more at home on a racetrack than on the road, which is a sentiment echoed by Ducati’s statement “an amateur rider on the ‘SP’ will be faster than if he were riding the more demanding ‘R’ version”.

As well as the aforementioned DDA+, you get a full suite of Ducati electronics including their latest Traction Control EVO 3 which effectively tries to predict wheelspin and stop it before it happens. And then of course you have all the other rider aids; wheelie control, slide control, shifter/blipper as well as Öhlins Smart EC2.0 suspension.

I know, at £32,295 it’s not exactly cheap and it doesn’t even come with a trick system, but it’s still proper cool isn’t it. I can’t afford one and I doubt I’ll ever be able to, but if any of you out there can, and you are thinking of going for it, will you let me know because I’d love to come and have a look at it. And touch it. And maybe give it a lick.

My sons is in at Sheffield Ducati having a few choice upgrades fitted.
I just got my full license so I will be following (not chasing) him a lot this year too!
Sure you can imagine how haft it was last year on my Suzuki GSX-S125 last year him on the V4R
Wont be quite as bad as I will be on. Honda CBR650S this year following the SP but hey ho he will still bigger off and play when something fast appears and I will leave him to it!
Sure I will get to touch it, even sit on it if I’m careful but if he catches me licking it I will be in trouble!
Can’t wait to see it though 😃

I have one arriving sometime this Year from Leeds Ducati, can’t be more specific because of C19 derived delivery issues. Will let you know when it lands, some good roads up here in and around Harrogate. Nice Pubs too!

She has arrived!!! Wow magic carpet of a ride in Street mode. I have had a couple of bimbles out as weather has not totally stopped play yet! 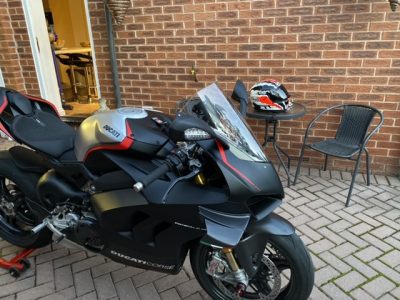 Im supposed to get one in March ( thats what my dealer said) more than welcome to check it out only hiccup is im located in Belgium …. well that could be an excuse to hit up Spa-Francorchamps …