Who can remember the olden days, when bikes just kept getting faster and faster and faster? The 80s and 90s were an exciting time in the world of motorcycles, with all the manufacturers competing to have the best, the sportiest or the outright fastest motorcycles in their showrooms. And then something happened that changed everything.

Throughout the 80s, bikes were getting better and better and starting to look a little bit like the kind of thing we would call a ‘contemporary sportsbike’ today. But it was the early 90s when things really started hotting up; or more specifically, 1992, when Honda released the very first CBR900RR FireBlade. The FireBlade was one of many game-changers in the 90s when it came to sportsbikes; there was Ducati’s 916 in 1994, the Aprilia RS250 in 1995 (if you’re into that sort of thing), and then of course the Yamaha YZF-R1 in 1998. There were some mega exciting bikes appearing; iconic bikes and certainly classics by today’s standards.

But whilst all that was happing on the sportsbike side of things, the manufacturers were fighting a decade-long fight (or a century-long, some might argue) to have the fastest production motorcycle ever. It started in earnest when, in 1990, Kawasaki threw down a ZZR1100 shaped gauntlet, with its 1052cc engine making 145bhp. Capable of 176mph (283km/h), it was indeed the fastest production motorcycle, in the world.

And it took quite a few years for the big Kawasaki to be dethroned. In fact it wasn’t until 1996, when Honda released the CBR1100XX Super Blackbird. It had a bigger engine than the ZZR1100 (1137cc) as well as more power (164bhp), and crucially was capable of the slightly higher top speed of 179mph (287km/h).

Everybody knows what happened next. Suzuki decided they wanted to play and released the GSX1300R Hayabusa in 1999. Suzuki couldn’t have made it any more obvious that they were after the Blackbirds ‘Fastest Production Motorcycle in the World’ title, Hayabusa being the Japanese word for peregrine falcon; not only the fastest bird on the planet, but the fastest animal on it too. Oh and guess what peregrine falcons eat for breakfast… Blackbirds.

The first ‘Busa was allegedly capable of 194mph (312km/h), absolutely annihilating anything that came before it in the top-speed stakes.

In 2000 though, Kawasaki were to launch the ZZR1200, so it didn’t look as though the ‘Busa would hold the record for long. Before the ZZR1200 was released, there were all sorts of rumours flying round about it surpassing the 200mph (322km/h) mark, and whilst it was exciting a lot of people, it was scaring others. What would these ever-more-powerful motorcycles, capable of 200mph, lead to? The concern was that we’d see people using these bikes to their full potential on the streets, and there were more than a few politicians (particularly in Europe) getting a bit antsy about it.

So before the sportsbikes, or bikes with big power figures, started getting banned by various governments, the manufacturers decided they probably needed to do some self-policing. Show some restraint, so to speak.

It was all very unofficial, and slightly clandestine, so it’s difficult to know exactly how it all played out, but rumour has it that it was BMW that instigated talks with the main bike manufacturers, (Ducati, Honda, Kawasaki, Suzuki, Yamaha) and said enough is enough. Interestingly, at the time, BMW didn’t actually have a bike capable of ‘competing’ for the fastest production bike title, but it didn’t stop them getting involved.

Anyway, despite BMW not actually having a horse in the race, somewhere a meeting took place and it was agreed, completely unofficially, that all the main manufacturers would limit their bikes to 186mph (300km/h). The intention was that it would put a stop to motorcycle performance figures getting sillier and sillier which, with any luck would ensure the longevity of high-performance motorcycles, in a world that’s becoming safer and more sanitised every day.

Because when the Kawasaki ZZR1200 did come out, in 2000, all it would do is 186mph. That’s despite being capable, on paper at least, of considerably more. The 2000 model Hayabusa, although technically the same as 1999 model, wouldn’t do any more than 186mph, like the Kawasaki.

Nowadays, of course, there are more and more bikes that are capable of, reasonably easily, hitting that 186mph mark. Everywhere you look, there’s a 200bhp motorbike. So now, in 2022, is the 186mph gentleman’s agreement outdated? Should it be completely forgotten about (it’s quite clear some manufacturers have)? Or perhaps it should be revised. Do we need a 200mph (322km/h) gentleman’s agreement? Or should it be legislated? Is there really any point in having an agreement that only certain parties adhere to? Probably not, if you want the motorcycle market to be a level playing field.

If you ask me, the concerns people had 20 years ago about 200mph motorbikes are probably still as strong today, if not stronger. Riding a motorcycle on the road at 200mph is dangerous, however you look at it, so there’s definitely an argument to say that the manufacturers really ought not to be selling bikes capable of that, to punters. That’s definitely not a notion that I agree with, but you can bet your bottom dollar that it’s one that some will argue virulently. And if the right people (or the wrong people) make enough noise, it might be taken out of the manufacturers hands, anyway. I love the idea of 200bhp, 200mph motorbikes, but not everyone does.

As it becomes easier for the manufacturers to build bikes capable of more than 186mph, I expect more of them will build more bikes that are capable of just that. But I can’t help feeling though, that with every 200mph bike, they’re poking the sleeping beast. One day, one of these superfast, superbikes might just be the straw that breaks the camel’s back. If that happens, I expect we can look forward to power figures being capped by legislation, mandatory speed limiters on bikes, and an end to motorcycling as we know it. Tread carefully, manufacturers, tread carefully.

Cycling…..bear with me,
Access to race tracks has never been easier and is reasonably affordable A motorcycle only road is unthinkable beyond the race track in England and road closures are next to impossible although the law can allow it so the track is the only place where a fast sports bike can get a good thrashing and there’s very few if any being built, typically they’re lost.
However taking a lead from the cycling community who have fought tirelessly for their sport and won infrastructure that suits their needs. So are motorcycle only roads really an impossible dream.
Yes there is noise and I’ll continue making it too but electric can help keep race tracks open and help nurture smaller community run tracks giving even easier access to personal wellbeing via motorcycling.

Took my flashed and piped 2019 Busa to the drag strip few weeks back. All modern 1000cc sports bikes were more than a match for the big girl. 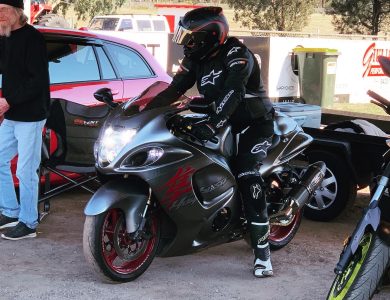 Great article Boothy… One small nitpick though. The weapon Kawasaki came up with to dethrone the Hayabusa released back in the 2000 was the ZX12R. Then again it was never really decided which of the two bikes was really the ultimate weapon. Sometimes the Busa was faster and some times the ZX12R was faster..

But to the blog you wrote. A bike that is capable of speeds well over 200mph is kinda silly really, but then again not. But rather have the manufacturers pull the handbrake than having legislation to end the fun. When legislation get involved, they have a tendency to overreact and things always go sour when that happens..

4
Reply
Search Our Articles
Past posts